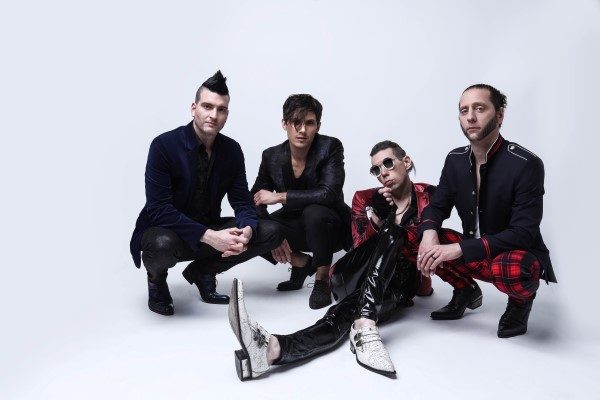 Just over three years from their last full album release, Marianas Trench is back with their highly anticipated fifth studio album Phantoms. They gave their fans a little taste of what to expect in late 2018 with the lead single “I Knew You When” and accompanying music video which seemed to little to quench their thirst for new music. The new album is available now, and their Canadian tour kicked off last night, on March 6. We chatted with Mike Ayley around the release of the single, which you can catch up on here.

Lead singer of the band Josh Ramsay has said “I wanted to set an album from the perspective of someone descending into madness as he inhabits a house haunted by the ghost of his former love. I looked to Edgar Allan Poe for inspiration. Strangely, the date he was rushed to the hospital preceding his death was October 3rd, the same day our first album was released, and the same date I was once to be married. Even more strangely, we finished this album on January 19th, his birthday. I’m not one for superstition, but that does feel oddly serendipitous.”  Ramsay has also answered a plethora of questions on Twitter from fans about the album and the inspirations behind the album and various other questions relating to the new album.

We were fortunate enough to ask the band some more questions about their new album, the upcoming tour and more:

Josh has said to fans on Twitter that there were new instruments you were experimenting with for Phantoms. Which was your favourite to use? Are there any that you think would have made a good addition to the album?

I would say that all of the choices we made added in a positive way to the album. We definitely tried out more than the stuff that made the cut. It was very cool having an “album setting” that made it possible to use random instruments like a harpsichord or theremin. We also used our traditional instruments in different ways like running guitars to effects pedals or even vocals through random effects. It allowed us to do what we always have done while keeping the music fresh and current.

He also said that you experimented with synth-like sounds but were made with actual instruments instead of digitally. What kind of instruments were used to emulate the more digital sounds of the album?

The digital world has come such a long way that now you can access real sounds for so many instruments. The strings, many of the organ sounds and percussion sounds that were available to us on this recording wouldn’t have worked in their past recording incarnations.

“Echoes of You” features Roger Joseph Manning Jr, were there any other artists you were considering to collaborate for this album? Any, in particular, you would want to work with in the future?

There are so many artists we’d love to work with. There are current artists who are doing great stuff and there are living legends who have been inspirations to all of us through our career. It’s hard to pin down to just one or two but Sting would be cool or if we did a rocker track I’d love to have Dave Grohl on it. He’s a beast!

Between Ever After and Astoria the band seemed to be joining all the songs with instrumentals in between the tracks, but this seems to have stopped with Phantoms. Is there any particular reason you decided to switch it up on this album?

Ever After definitely had the every-song-connected thing happening. With Astoria there were spots as well, although not the entire album. The goal with that album was creating that musical score feeling to match the album setting. On Phantoms, there are still a couple of spots with transitional connectors like “I Knew You When” into “Death Of Me” or the piece after that that leads into “The Killing Kind”. As well, the opening track “Eleonora” was written to end in the key where it would lead right into “Only The Lonely Survive”.

If you had more time before the deadline do you think the album would have come out differently?

I don’t think so. In this day and age this would NEVER happen, but if the record label said something like “you can’t put an album out for another 6 months” it’s possible there would be another song on Phantoms. That would only be because there was more time and not because there were any songs left unfinished. The songs that are there are exactly as we hoped they would be. Nothing was sent off to mixing and mastering unless we thought it was complete.

You’re touring most of Canada this March and part of the US in May, what can fans expect from the show? Are there any stunts you can give us a hint about like in the past when Josh would fly over the crowd when playing guitar?

We really wanted to create the intimate vibe that is Phantoms, so we’re doing mostly theatre sized shows to really bring the people into the world with us. We’re aiming to make the shows feel like a masquerade ball and the fans are all invited to “dress to impress” and really get into the experience with us!

What songs off of Phantoms are you most excited to play live? Which songs do you think the audience will like the most?

It’s funny, at first I thought that “The Killing Kind” might go over people’s head for the first few listens but the feedback after the album being out just a day has been very surprising. That seems to be among almost everyone’s favourite tracks. I’m very excited to play that one as it’s probably my favourite too. “Echoes of You” is really cool too with the big vocal section that is the last third of the songs or so.

“The Killing Kind” seems to have many different levels and aspects put into it including lyrics from other songs on the album, as you guys usually do, but are there any other little hidden gems that fans might not pick up on right away?

I can’t think of any particular easter eggs at the moment. I mean there are a couple of allusions to previous work of ours. I think the real gems are the many, many layers and musical touches that lay within each song. The amount of time and detail we put into every song was quite extensive.

And finally, what do you hope your fans gain from this album?

It seems like they’re in for the whole experience so far. I can’t wait to see the reactions live around the world.