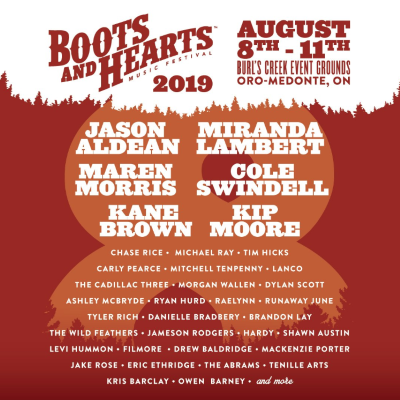 Boots and Hearts released more artists to their already stellar 2019 lineup, and they aren’t disappointing.

“The 2019 headliner announcement is so diverse with its mix of country superstars, Jason Aldean, and Miranda Lambert; alongside the powerful new voice of Kane Brown. Our fans are truly in store for another memorable experience where they get to live that #bootslife all over again!” said founder Eva Dunford, in a release from Newswire.

The must-see country music festival, held every year in Ontario, brings some of the biggest names in country music all in one place – joined by some of the most promising up-and-comers both in Canada and the United States. Featuring attractions, games, and a camping ground for concert goers, Boots and Hearts brings thousands of music lovers together for four incredible days. This year marks the eighth annual festival run.

“Welcoming two leading female artists like Miranda Lambert, a country icon who has excelled in the industry for nearly two decades and chart-topping artists like Maren Morris is truly an exciting experience for fans this year,” says Lisa Zechmeister, Director of Booking and Development. “Going into our eighth year, it’s very special to have artists’ Cole Swindell and Kip Moore perform on the Boots and Hearts mainstage at our home in Oro-Medonte at Burl’s Creek Event Grounds. 2019 is going to be another epic year for our boots fans!”

The festival runs from August 8 until August 11 at Burl’s Creek Event Grounds in Oro-Medonte. Tier 1 tickets are still available at www.bootsandhearts.com; prices currently sitting at $229.99 for GA pricing and $549.99 for VIP – taxes and fees not included. Get your tickets now and come party with us at Boots and Hearts 2019!