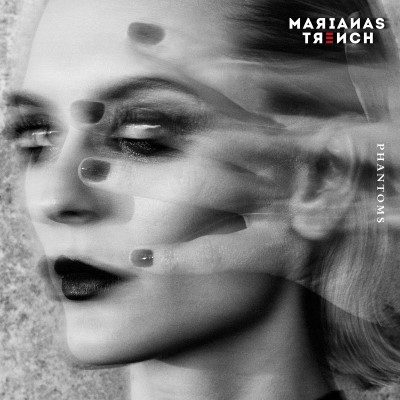 After just over three years since their last studio album, Marianas Trench is finally back with some new music. Leading up to the release of their fifth full-length album, Phantoms, they released the lead single “I Knew You When”, as well as “Only The Lonely Survive” and “Echoes of You”, as well as many teases and hints across their social media. The album, released on March 1st, was only a few days before they hit the roads for a Canadian and American tour but is so well put together fans shouldn’t have a problem memorizing it start to finish before their shows.

There truly isn’t a bad song on this album. As they have done with all of their albums, their sound grows and transforms between every release. It somehow sounds nothing like what they’ve done in the past yet it is undeniably quintessential Marianas Trench. The harmonies alone in the first track “Eleonora” pack a punch for the listener in the short minute it lasts. It sounds ethereal and choir-like while still highlighting lead singer Josh Ramsay’s incredible vocal range. The band effortlessly blends a multitude of genres and sounds together that makes it impossible to class this album into one category. They make it almost impossible to class a single song on this album into one category with the amount of levels and elements in every song. “Your Ghost” is one of the songs that most fits in the pop category and is very upbeat and fun to listen to and easy to dance along to. “Glimmer” seems to be one of the slower songs on the album and possibly the closest to a ballad Phantom gets – the lyrics telling a story of going back to how a relationship was and the yearning to change how events unfolded. “The Death of Me” could also fall in the realm of a ballad, but not compared to previous songs like “Beside You”, “Forget Me Not”, or “Porcelain” from their previous albums. There really isn’t a song on Phantoms that could be compared to their other ballads, any of the slower songs on this release still have heavy elements of pop and the beat is much quicker than previous releases but it doesn’t feel like the album is missing the element of emotional backstories, what most fans have come to expect from Marianas Trench albums. The album closer “The Killing Kind” may just be one of, if not the, best songs the band has ever released. There are so many levels and elements in the song – harmonies, complex orchestral sections, lyrics from previous albums tying everything together. This song moves in a way that leaves the listener craving to see it live. In a live stream on February 28th for a listening party for the album the night before release Ramsay said they started recording this song and finished mixing it within the week between Christmas and New Year’s, which seems absolutely absurd with how complicated the song seems. It has obvious ties to Astoria with some of Ramsay’s screams and the backing guitar, as well as other Easter eggs for fans from previous songs. It is almost a given that “The Killing Kind” will be at the top of many of their fans’ lists of favourite songs.

The band is known for taking a few years between albums to tour it thoroughly as well as having some downtime before shutting themselves in the studio before coming out with new music. Each time they have come out with such a different sound than they had beforehand and makes it very easy to see why they have reached the level of success they have. This album is likely to propel their careers even further and allow them to reach milestones they haven’t quite grasped yet. I honestly wracked my brain on how to make this review as unbiased as possible as I have been a fan of this band for ten years, but this album made it impossible. The creative minds of the band will never cease to impress.