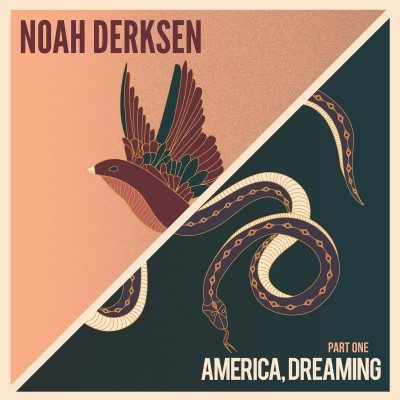 America, Dreaming is a full-length record containing Noah’s observation of his own American identity as an American-citizen growing up in Canada. It was written through time spent living and traveling across the country – from Oregon to Nashville, and New York to California. The album was recorded and produced by Murray Pulver in Winnipeg.

He will be releasing the album in 3 distinct parts throughout the year, beginning with Part One, which our lucky readers have the chance to hear early!

After listening through these three songs numerous times, I have come to the conclusion that although each is incredible in its own right, my favourite would have to be “What Kind Of Love Is That”. Derksen’s vocals are impeccable, and the lyrics are relatable, which is something I tend to look for in a song.  That being said, the closer on Part One, “Tennessee Lines” has a more upbeat folk-pop vibe which also pulled me in.

Check out the first 3 songs below, and remember it will be available digitally everywhere starting tomorrow, March 1, 2019.

Noah shares on these three tracks,

“Each of the three songs on this EP come with a unique story, and were written in a specific place. One from a rented room in Portland, Oregon, one from the back of my van parked in Nashville, Tennessee, and one from the second-floor of my home in Winnipeg&#39;s West End neighbourhood.”

“The songs came to life through the vibrant and generous community of artists in Winnipeg, from workshopping the songs with other writers, to tracking instrumentalists at Signpost Studios; every step of the way was very much a collaborative effort. Coming back to Winnipeg after living on the west coast for nearly 6 years, I’m blown away by caliber of musicianship and the strong support networks in this city.”

Noah will be touring throughout March, so if you’re able, check him out.