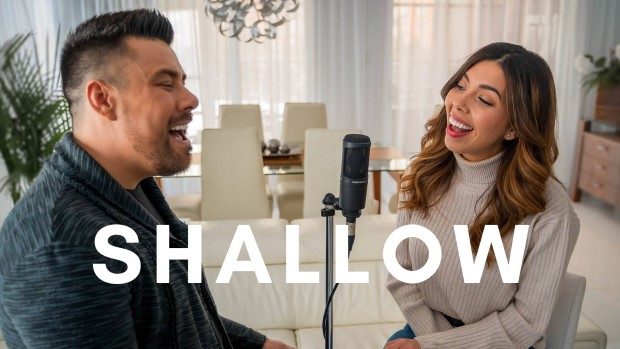 What can sometimes make an artist extra special to us is not only their ability to create their own great music but their ability to be fans of other music artists as well. For an artist like Carissa Vales, she has been a proud fan of many powerful artists including the amazingly talented Lady Gaga. Sharing her love for other artists is almost as important as sharing her own original music. Vales is often inspired by Gaga’s music and often finds herself with a connection to many of her songs. In 2016 Vales recorded her own stunning version of Gaga’s mega hit, “Million Reasons” and released her own video to accompany the song.

Released back in September 2018, “Shallow” was the first single to emerge from the soundtrack to the film, A Star Is Born. Performed by Lady Gaga and Bradley Cooper Vales found herself in love with “Shallow,” and hit the studio to record her rendition of the song.

Vales tells Canadian Beats why she loved the song: “The song is simple yet so powerful. The lyrics are wonderful. The harmonies. The vibe. Lady Gaga and Bradley Cooper sing it with so much passion that, when I first heard it, I was immediately blown away.”

Featuring a collaboration with Dutch Bickell, the duo gives us a spine-tingling version of the song that stays true to the original version but also allows us to enjoy these two artists individually. Vales vocals are strong and powerful, coupled with Bickell’s deep and rustic vocals. Vales explained why she chose Bickell to accompany her on this project; “I loved some of his demos, which included a cover of Cher’s “Believe.” I love his voice and for a long time I wanted to do collaboration, but I didn’t know how we could blend our universes together. When I heard “Shallow” for the first time, I knew that was the perfect song for us!!!.”

The duo blends their voices perfectly and even add some extra harmonies and musical elements that separate their version from the original. Recorded and filmed in their hometown in Quebec, and under the musical direction of Mario Hebert the two make a great and dynamic vocal pairing.