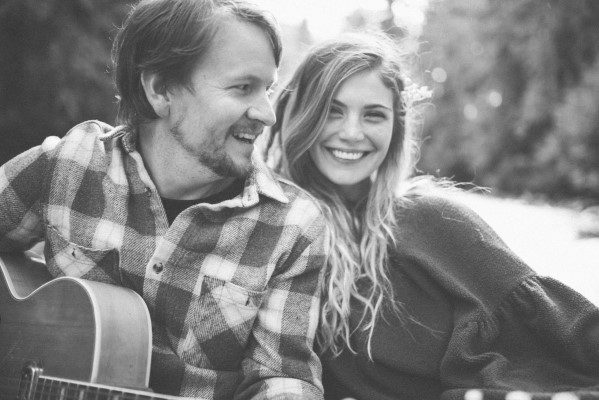 Jon Middleton and Sierra Lundy met in the small town of Salt Spring Island, just between mainland British Columbia and Victoria Island. Both were playing at a music festival, where they realized how well their voices sounded together; and their instant chemistry led them to create Ocie Elliott. In 2017 they released their first EP together which was a self-titled collaboration, leading them into the Canadian music landscape; in their time as a duo has nabbed opening slots for performers Mason Jennings, Sons of the East, Kim Churchill, and Roo Panes, to name a few.

We caught up with the newly formed duo to find our more about their new EP We Fall In, life as a duo and more!

When you first met on Salt Spring Island, how did the idea to create music as a duo come together?

(Jon) It actually came about through the prompting of Sierra’s sister, Danica. She had been wanting us to sing together for ages and then finally about four years ago she and our mutual friend Sara coaxed Sierra and I into performing a private ‘concert’ for them. We had never sung together and so we picked a song we both knew –– Gillian Welch’s, Look at Miss Ohio. We probably played it six times for them that night and as soon as we started singing together we both felt that something was really right about it. It took six months or so for us to sing together again, but after that initial ‘performance’ we both knew that this was something we both wanted to pursue.

How does the creative process work between you?

(Sierra) Our process has evolved quite a bit since we first started writing. Jon has been at it for a while now with his solo project and Jon and Roy, so the creation of our first EP looked more like Jon bringing me songs to throw harmonies on. Since he’s been doing it alone for years, it’s been a challenge to learn how to do it together… it’s like relearning how to tie your shoelaces after you’ve been using the bunny ears system for so long haha.

But also, I think a lot of my ‘perfectionistic’ shackles that have made it hard in the past for me finish songs really loosened for this past album, so it’s definitely become more of a collaboration. We’ll both randomly pick up a guitar or play around on the keys until the other one hears something they like. Then we make a ton of hilariously improvised iPhone voice memo recordings until something takes shape… sometimes we’ll spend hours on one phrase alone, just trying to get it to a place we both feel good about.

Tell us about the process of creating your debut album, We Fall In.

(Jon) We set out to make We Fall In in about January of 2018 after we’d seen a little success with our first EP. We knew we wanted to record in the spring and we knew we wanted it to be another shorter collection of songs, expanding upon the sound we had already started developing. One of the songs had been created in 2017, but the other six came about between January and March. It’s interesting how when you set a goal and have a strong idea in mind of what you want something to be like, it will just happen –– that’s how it was with this record.

“Mingle In Pine”, “Run To You” and “Hold My Name” are beautifully crafted songs. Was there a particular reason you chose those three as the first introductions to this album?

(Sierra) The only song we knew we wanted to feature ahead of the album release was “Run To You” — mostly because we both felt it was a strong song and sat well on its own (also since it introduced piano to our sound, it was a bit of a departure from our EP). Our label helped us with choosing the other two, and we agreed it made sense to squeeze the release of “Run To You” between two songs that are more analogous to our first EP. Also, since “Mingle In Pine” speaks to a winter fleeing, it felt like an uplifting track for the January blues we all know so well on the West Coast haha.

And you’ve kicked off your west coast tour – what’s the atmosphere like at an Ocie Elliott show? What can first-timers expect when they see you two live?

(Sierra) That’s a tough question… it definitely relies heavily on the audience and the venue, if both allow for the ideal performance from us, I’d say the atmosphere is soft and fragile but with undertones of humour and passion. But it’s hard to say because Jon and I are kind of in our own little world up there when we sing, so to us, the vibe always feels like a gentle vulnerability being exposed through music.

Since we’re only at the beginning of 2019, what else can we expect from Ocie Elliott this year?

(Jon) A lot more touring and another record! We are going to continue to go strong with this thing and travel the world –– back to Europe in the spring and summer, possibly Australia in June. Definitely more Canadian dates as well in the summer and fall and hopefully a UK tour in the fall as well (we both want to play in Scotland and Ireland especially). We’ve already started working on new material for our next album and we are planning to get back into the studio in late May –– it’s going to be a busy and fun year!