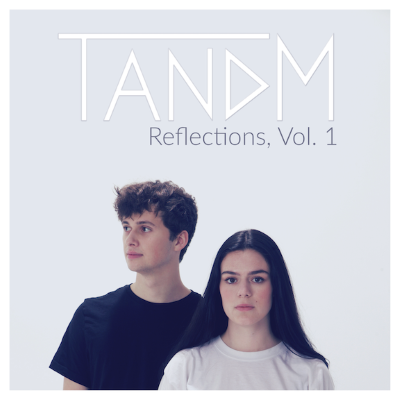 Toronto, ON-based singer-songwriter duo Maxine Beck-Sinderby & Thomas Franklin, better known as TANDM, have released their debut EP Reflections Vol. 1. Inspired by bands like Arctic Monkeys and Of Monsters & Men, TANDM are excited to release their music to the world.

Right from the opening song “Chandelier”, I was already impressed with Beck-Sinderby’s voice. It has an amazing sound throughout with a low tone switching to higher with ease. The melody of the guitar and drums throughout are flawless and smooth, making this album start off strong.

“Girl In The Bathroom Mirror” has a slower pace to it, showing the melodic sound of the band compared to the higher tempo opening track. The song speeds up a tiny bit later on as the drums come in heavier, flowing together great throughout.

Can’t say much about “Interlude” as it is a minute and a half long musical arrangement of head bopping drumming, smooth guitar work, and beautiful mild vocals accompanying it.

“Unconfined” reminds me of an Alanis Morissette song throughout. The grungy kind of tone in the song including the flawless solo towards the end sounds like it was ripped directly from the mid-’90s and given to our modern day listening ears.

Finally, “Dreamworld” which features Elizabeth Metaxas, whose voice fits perfectly with Beck-Sinderby’s, is a great album closer. It sums up the bands sound and skills but giving them enough room to try new things in the future.

For an opening EP, TANDM are stepping out in the right direction with this release. This is the kind of music I can easily put on while doing anything in my normal everyday routine and everyone would enjoy it.