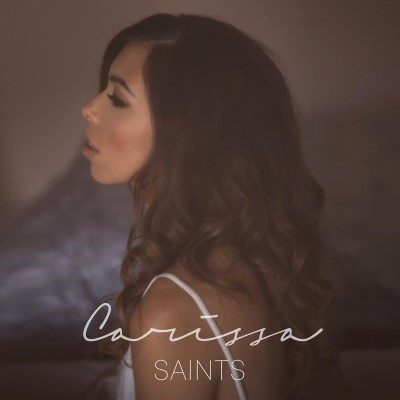 Carissa Vales released her latest single “Saints” on October 19, 2018. The single which was written by Vales and Marc-André Sauvageau is the follow up to her debut album release, Burning Your Love. Vales had a busy 2018 with the release of a new single, touring and performing as part of Etienne Drapeau’s show Fiesta, and the release of her Spanish-language EP, Amor Prohibodo which was a collection of some of Vales’ favorite songs.

Proving her strong musical versatility, Vales has officially released the French-language version of “Saints.” Now available through all major music platforms, “Saints (VF)” expands Vales’ musical library to her French-speaking fans and celebrates her ability to create great music in multiple languages. “Saints” was co-written in both languages with fellow artist and friend Marc-André Sauvageau. “I am a proud Québécoise and I think it’s important to respect the language and our culture!” Vales explained the importance of creating the French version of her song. “Also, I had lots of fun translating it with my good friend Marc-André. He really helped me structure what I wanted to express in both languages.”

Vales told Canadian Beats how the writing for “Saints” started; “I felt it was very important for me to take a small break and to find myself as a woman, and also as a singer/songwriter before releasing any new material. I wanted to focus on authenticity and express myself from the heart. I have to admit that I was pretty nervous about the release of “Saints” because I’ve never exposed myself like this before. This story is very personal, but the reaction that I received from people who listened to it taught me that we shouldn’t be afraid to be vulnerable.”

“Saints” is a great song. Marking the ups and downs that we can endure in our relationships, “Saints” reminds us that we are not always perfect. The track itself is catchy and Vales always impresses with her sweet vocals. “The inspiration of the song came to me at a time when I was trying to get out of a relationship that meant the world to me. Something in me just kept fighting for it, even though I knew it would crash. We couldn’t seem to let go of it and I felt trapped in this vicious circle, not knowing how to get out of it. It was so consuming and without realizing, I ended up trying to fix the brokenness with everything I had so the other person could be happy. But these pieces, I couldn’t give them away without taking them from myself. That’s when I learned that we don’t have the power to save anybody but ourselves. We ain’t saints!” says Vales.

The official music video will be launched soon. Vales worked with Koma Films alongside director Adam Kosh and director of photography Arnaud Dumas. Together they turned the music video concept into a mini film. “Since I am also passionate about acting, I thought it’d be a good idea to develop the universal message of the song by creating a short film. The filming lasted five days and we filmed on six different locations. Since it’s the first film I have ever produced, I have learned a lot about working on both sides of the camera. I was in charge of the locations, the costumes, the budget, the crew, etc as well as portraying the lead character in the story. The team that worked on the project was amazing. It was such a rewarding experience for me. Adam and Arnaud taught me a lot about the film industry and producing a project like this.” Vales tells Canadian Beats. “I am very proud of what we’ve done. It’s the first music video that has special effects in it! I am planning to release it in the next couple of weeks. The only thing I can reveal about it is that people can expect action, money and love scenes!”

“Saints (VF)” is available now on all your favorite music streaming platforms, you can check it out here. As well as the original version “Saints” can be found here. The new single will be sent to radio on February 18, 2019 so make sure you request it at your local radio station! The official video is set to be released shortly and we will make sure we share it with you when it does.