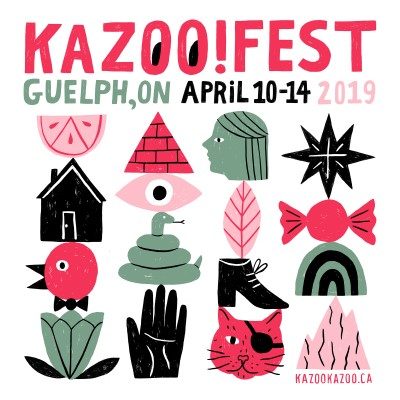 Guelph, ON’s Kazoo! Fest is back for its 12th year and the lineup features over 40 musical performances, visual and media art, contemporary dance, the Kazoo! Print Expo, and more!

The festival will take place from April 10-14, 2019 at various locations in Guelph, ON.

This year’s festival will also include a co-presentation with indigenous record label RPM (Revolutions Per Minute) as well as a selection of notable artists from across Canada including: JOYFULTALK, DJ Kookum, Motherhood, John Southworth & The South Seas, Tanya Iyer, Pantayo, TRP.P, Edna King, Bonnie Doon, and many more.

The Kazoo! Crony Pass (festival passes) are on sale now for $75 as well tickets for select events. The full schedule will be announced in the coming weeks. Tickets and more details can be found at www.kazookazoo.ca