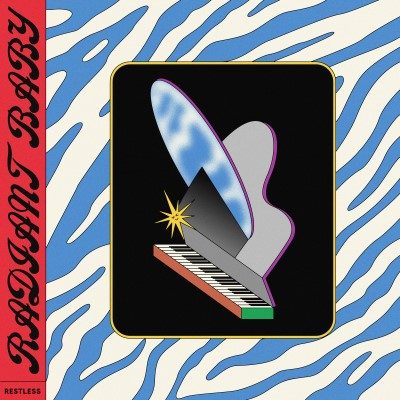 Restless is the first full-length album by Montreal based Radiant Baby.

Restless starts by luring the listener in with a lonely saxophone solo but then kicks into funky, cheerful disco arrangements with a synth-pop aesthetic. The following tracks keep this high energy and optimism until, halfway through the album, Restless starts to shift. Though still a dance album at its core, Restless loses its lighthearted tone and become more aggressive and anxious.

With this shift in tones, Restless evokes the passage of a dreamer passing from pleasant dreams to nightmares – restless dreams in the Restless. To punctuate this, the final track on the album even remixes previous arrangements of earlier tracks with a darker tone to signal to the listener the souring of the previous ‘dreams.’

Restless primarily uses synths and male vocals, but some tracks also use piano, saxophone, female vocal backing, electric drums, and even electric hand claps. The complicated, layered arrangements of Restless contrast its simple lyrics; simple lyrics which would be easy to sing along to while listening to Restless at the discotheque.

Standout tracks to me were “Firecracker” and “Funny Games”. These tracks really show the variety of moods Radiant Baby employs on this album while also demonstrating his skill at layering electronic soundscapes.