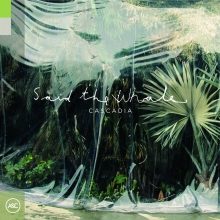 With a spot already secured on Exclaim’s Most Anticipated Albums of 2019 list, Said The Whale are set to release their sixth studio album, Cascadia on February 8th.

Said The Whale are no stranger to the Canadian music scene. Consisting of Tyler Bancroft (vocals/guitar), Ben Worcester (vocals/guitar) and Jaycelyn Brown (keyboards), this band has spent more than a decade together. According to the band, their music is pure West Coast. “There’s rich harmonies drawn from California pop, crunchy guitars rooting in the lineage of Pacific Northwest indie rock, and naturalistic lyrics inspired by the water and mountains of their hometown of Vancouver.”

The album begins with ‘Wake Up’, a tune that leaves one with the impression of coming out of a dreamlike state. According to Said The Whale, “Wake Up is about proximity. The song references the things [they] know and love as a part of [their] urbanite lives, and [their] natural desire to get away from the city. Everywhere on earth there are beautiful places – [they] keep them close and call them sacred.” The repetition of the lyrics ‘wake up’ towards the middle of the track, almost like a song skipping a beat, aids in capturing the attention of the audience.

‘UnAmerican’ was released as a single late last year and reached number one on some radio programs. With its neat bass, creative use of distortion and unique melody, this solid pop-rock tune leaves us all wanting more. There seems to be an effect on the vocals, especially during the ‘whoo-hoo”, to capture the attention of the audience.

‘Old Soul, Young Heart’ begins by a melody created by simply finger picking notes on a string instrument. It has almost a mournful feel. According to Worcester, this track “is a song that [was written] as a thank you to Dan [Mangan] for making art that moves [a person].” Although this track began as a song written to Dan, Worcester says that he “decided to complete the song with a verse about [his dad], who aside from [his] mom, has probably been the biggest influence on [his] writing.”

‘Record Shop’ has future single written all over it. It is a solid, high energy rock tune that leaves the audience singing and bopping along. It leaves the impression that one can get lost in the music and forget all their troubles, if just for a moment. The harmony towards the middle adds an interesting twist.

‘Level Best’ is a track about always being there for someone. Written by Bancroft, this track was penned as an ode to his son as a reminder that no matter what he ends up doing, there will always be someone there for him.

The album finishes with ‘Gambier Island Green’, a track dubbed by Save The Whale as a “meditative ballad drenched in moody ambience”. This track is drenched in an otherworldly sound. It is almost as if someone is reminiscing about a special place, as they are throwing in visual images to allow the listener to feel as if they are there. Said The Whale really pulled out all the creative stops to present an artsy finish.

According to Said The Whale, while listening to this album “the listener can hear background chatter and snippets of studio experimentation, making for an album that’s as spontaneous as it is meticulously beautiful.” They certainly hold true to the fact that they “have perfected a big-hearted sound that’s warmly organic and filled with pop hooks.” So what are you waiting for? Make sure to check out their upcoming tour dates with Mother Mother and go show them just how amazing they are. You truly will not be disappointed!

Connect with Said The Whale: