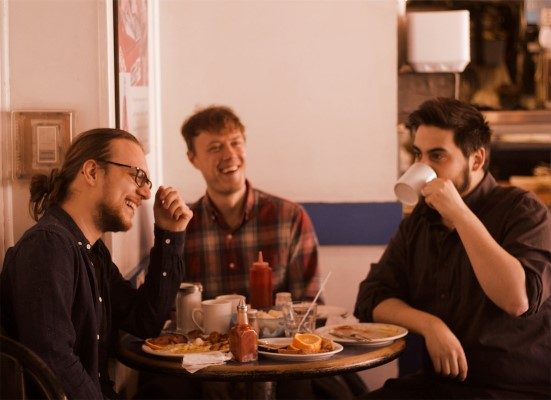 Toronto, ON-based band JV’s Boogaloo Squad is fronted by Joel Visentin. The band will be releasing their album, Going To Market on February 15, so of course, we had to chat with them in advance! Check out their track, “Squadzilla” from their upcoming album below and find out more about the band in our Five Questions With segment.

Hi, I’m Joel Visentin! I grew up in Winnipeg and have been living in Toronto for about 12 years. For pretty much my whole life I’ve been playing pianos and keyboards and I probably won’t ever stop. I came out to Toronto out of high school to study music and I’ve been playing music professionally ever since. I’m not sure how long or in depth of a description this is supposed to be so I’m just gonna cover the important stuff. I’m more of a cat person, I love pineapple on pizza, I’m a big Winnipeg Jets fan, I devour Sci-fi and Fantasy books and I probably have a Simpsons or Seinfeld quote ready to go for almost any situation.

So a few years back my writing style was very different. I was writing a lot of complex, cerebral and serious jazz music because that’s what you do when you went to jazz school. I started realizing that the music I was writing wasn’t even music that I would want to listen to so why was I writing it? So I started this new band with my mantra being “I have to like it right away.” It seems simple and obvious but it’s amazing how much it helped and made me better and getting my own voice out. Instead of thinking “is this cool? is this hip? Is this impressive? Is this different?” which are much more difficult questions to answer I just start writing and if I like it I go with it. No matter how simple or how complex the idea is.

We have a lot of shows coming up especially this month. First and foremost is our CD release at Burdock on Feb 21st. Also, we have some tour dates as well. Feb 15th we’ll be in Kingston at Musiikki Cafe, Feb 16th We’ll be in Peterborough at the Black Horse Pub, Feb 17th we’ll be in Ottawa at Avant-Garde Bar and Feb 18th we’ll be in Montreal at Barfly. On top of all this for years we’ve been playing regularly at The Rex in Toronto and we’re very lucky to have this amazing club as a home base for our band. This month is no exception we’ll be there from 7-9 Feb 10th and 24th.

Our show can be a lot of different things. We’re a high energy instrumental soul/jazz organ trio and we don’t plan our setlist before we start playing. So the vibe of the crowd really informs the energy and pacing of the show. We’ve seen dance floors erupt and we’ve seen crowds that just want to sit and have a beer with their friends and listen. Personally, I love both vibes in their own way. In addition to our original stuff we also play an extensive repertoire of classic soul, funk and soul/jazz covers. So someone could come to see us 2 or 3 times and likely not hear the same song twice. I try to be as funny and irreverent as I can on the mic between songs which sometimes goes really well and other times…. well it’s fun to watch me bomb!

I’d have to suggest our first single “Squadzilla.” It’s a fast-paced, funky tune and I’m really psyched with how it turned out. We got a couple guest musician’s to play on the tune and it really made our song sound larger than life. Kelly Jefferson might be my favourite sax player in Canada so when he agreed to play on it I was beyond excited. Unsurprisingly he plays with fire and passion and takes the song to another level I didn’t think was possible. Also, we added my good friend Michel Dequevedo on percussion and the groove just gets so much deeper whenever that guy is involved. Michel was also one of the first musicians in Toronto to suggest me for gigs and get my career going when I was a 19-year-old jazz student so I was really happy to have him on the album.

Sure thing, I’m going to be very biased here and mention some of my friends but honestly, I think I’m just lucky to be friends with some extremely talented artists

First off I’ll say Barbra Lica. I’ve been in her band for almost 5 years, she just released a new album a few months ago and although I’m biased I think it’s amazing. She’s an incredible and understated singer and she charms the absolute pants off of every crowd she gets in front of. It’s been awesome watching her mature as a songwriter and I think her new release “You’re Fine” is really special.

I also love the band YUKA. They’re in the process of making a new record right now but I would highly recommend seeing them live whenever you get a chance. They’re just so funky and classic but modern at the same time. I was lucky to have a weekly gig with their singer Claire Doyle for about a year, we would play in this little club and she would just blow me away week after week.

My Guitarist Adam has his own band called “The Sinners Choir.” They play most Tuesday nights at the Cameron House and I think they’re one of the best bands in the city. They’re like if you mixed the 3 part harmony goodness of Crosby, Stills and Nash with Jimi Hendrix.

Finally (I could go on and on about all the great music in this city) I’ll say Joanna Majoko. She’s one of the most incredible singers I’ve ever seen. She’s only been in Toronto a couple of years and already she’s starting to take this city by storm. It’s hard to describe what it is about her mix of modern R&B and Jazz that’s so special so all I’ll say is you have to go see her. Her band plays regularly at Poetry Jazz Cafe as well as other spots so check her out!