Show Review – Emily Rowed, Chersea and ROYAL in Vancouver, BC 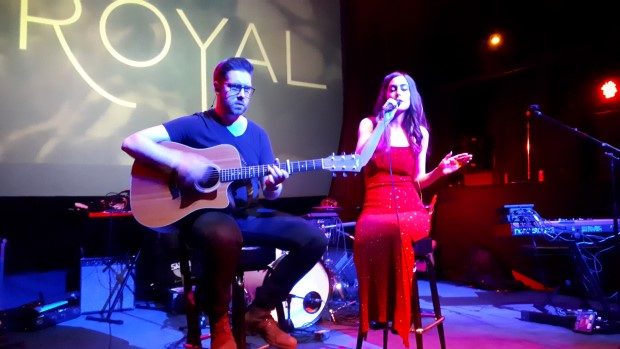 Who: Emily Rowed, Chersea and ROYAL
When: February 1, 2019
Where: Fox Cabaret, Vancouver BC

At the start of the night, the Fox Cabaret was lit with a deep crimson and sapphire blue on February 1st – the perfect setting for an intimate performance by three talented female artists.

The night started with Vancouver’s Emily Rowed who eased us into the evening with a set of optimistic but haunting electro-pop. Backed by keyboard and low tempo drums, Emily Rowed’s sound is slow and smooth; an interesting contrast to her stage presence which was energetic and lively. Emily had a pleasingly familiar relationship with the audience, encouraging us to ‘come cuddle’ up to the stage and swim in the sound.

Following Emily, was Port Coquitlam’s Chersea, celebrating her debut album ‘In Limbo.’ In short measure, Chersea and her band used drums, guitar, synths, keyboards and even trumpets to kick the night into high gear.
The dance floor opened up to the uptempo sound and the crowd started moving as one. Not to say that Chersea’s set didn’t have its reflective songs such as the powerful, ‘I Can’t Be You’ — but, in general, the crowd was hungry for the performance and Chersea and her band were happy to feed that energy back to the crowd in sound and performance.

The finale of the evening was Vernon’s ROYAL, also celebrating the release of her newest album Heart of Shadows. In a long, red dress, dark red lipstick, and evening gloves, ROYAL cut the figure of the classic Torch Singer. With a set that was romantic, glamorous, yet melancholy, her look definitely complimented her sound; particularly when ROYAL performed a cover of Lesley Gore’s ‘It’s My Party.’ I had the pleasure of reviewing Heart of Shadows upon it’s release, so it was an equally welcome pleasure to see the power of her songs in person. I was particularly moved by her performance of the song ‘Rebel.’

As a final note, at the end of each set, the artists took the time to acknowledge their gratitude at being able to perform on the stage together. This solidarity was supported with the finale as the three ladies gathered together to show their mutual respect for each other. It was a truly beautiful way to end an affecting evening.