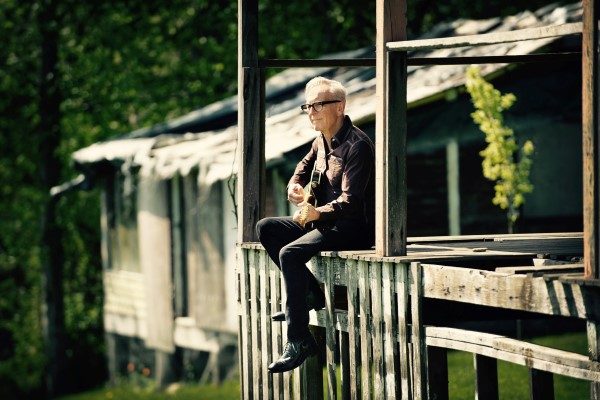 BC-based americana/country artist David Graff released his most recent album, Supposed To Fly in October 2018, and now we are happy to help him in unveiling a video for his newest single, “Watch Over The Ones I Love”.

The single speaks to something we all go through, losing someone we love. This is the prayer of a man who’s basically saying “take me before you take my family.”

Check out the video below and find out more about David in our Five Questions With segment.

I’m a songwriter from Bowen Island, BC, a twenty-minute ferry ride from Vancouver.  I started my musical career as a drummer, which I did professionally for years, but I gradually changed my focus to songwriting, which led to some early success in the music business. I took a break from full-time music about 20 years ago and perused a career as a visual artist, which is how I earn the majority of my income these days. Music and songwriting never stopped being my passion, and I have been fully engaged in that calling for the last 6-8 years. My new album “Supposed to Fly was released in October 2018.

My music fits most comfortably under the wide umbrella of “Americana”. My songwriting is influenced by elements of folk, country, pop, and blues. Lyrically, I aspire to write songs that share the core values of folk and country in that the lyrics generally tell a story that, hopefully, the listener can relate to on a personal level. Whether that story relates the events of a character’s life in a broad sense or focuses on a feeling or emotional moment in a snapshot, I always try to draw on personal experience to flesh out the details that allow the audience to connect personally with the song. I constantly try to write about the “universal” that everyone can relate to, but fill in the details with the “personal” that makes the song ring true and help paint a clear and believable picture.

Melodically, I still love a good hook, so I try to make sure each of the sections of the song are melodically interesting and memorable. Because of my love for great pop songwriting, I try and go a little beyond the country music tradition of “three chords and the truth”.

I’m doing album release shows March 8th & 9th in Vancouver and Bowen Island. We’re in the process of booking gigs for spring and summer in western Canada, with, hopefully, some travel further east as the word spreads.

My band includes some musician friends with whom I’ve played for almost 20 years as well as some incredible musicians who I was lucky enough to get on this album and for live shows.

I’ll leave it to others to describe our performance –

From INDIE Nation, “You can tell that they love what they do, and give you everything they have to give. This kind of music forces you to make an emotional connection, and sticks in your head all day. The smooth melodies, the live instrument sounds, and the lead vocals fit together perfectly to create something special.”

And from Americana UK, “His vocal style is gritty and emotional, with a good range and an ear for a catchy, sometimes unexpected melody.”

I like to think we are able to satisfy those that like to listen attentively (Watch Over the Ones I love) as well as those that came to dance (I Love My Truck).

“Supposed to Fly” is the title track to my album and a song that many people connect with. It is musically fairly simple, but with an anthemic melody and dynamic arrangement. And I feel like I managed to make the lyrics relatable in both universal a personal sense. “Watch Over the Ones I Love” is another song that shares those attributes and is a subject with which most people can easily make an emotional connection.

Apart from the early legends of Canadian songwriting, Joni, Neil, and Leonard Cohen, I’m a huge fan of Ron Sexsmith. He should have had a much bigger career, IMO. I also love Kathleen Edwards and Emily Haynes. Steve Dawson played pedal steel on three songs on my record. I’m a big fan of his solo albums as well as his production work. I’m pretty pleased to see the success of Colin Linden, Colter Wall, Leeroy Stagger, and The Dead South in the Americana.