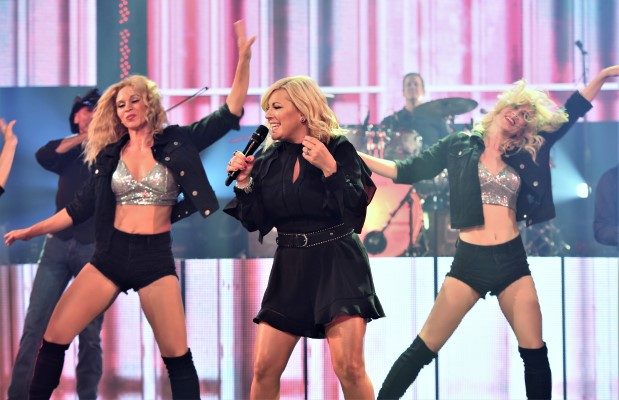 2018 was an absolutely amazing year for country artist Guylaine Tanguay. We saw the release of not one, but TWO full studio albums from Tanguay. In June the album 3764 Elvis Presley Blvd was released and in November the Christmas album Que les fêtes commencent! was released just in time to celebrate the holiday season. 3764 Elvis Presley Blvd is Tanguay’s Memphis inspired homage to the “King of Rock and Roll.” Throughout the year Tanguay celebrated many more career milestones including; touring around Saskatchewan with fellow Canadian country music artist Brett Kissel on his We Were That Song Tour, the release of her autobiographical book La ligne droite, the show La Fièvre du country sold more than 25,000 tickets, and total combined album sales exceeding over 125,000 to date just to name a few.

2019 is looking like it will be no exception either. Tanguay is busy as ever and has already kicked off the New Year with a strong force as she takes to the road to bring 3764 Elvis Presley Blvd to the stage and her fans. On January 30th, at the Cabaret du Casino in Montreal, the show debuted to an extremely excited crowd. Tanguay delivered an unforgettable evening of musical memories and a great tribute to the one and only Elvis Presley. Backed on stage by a talented band which was under the musical direction of her loyal band leader Sébastien Dufour, Tanguay shone brightly and performed for over 90 minutes non-stop. Tanguay also shared the stage with six amazing dancers who added to the evening’s entertainment with carefully choreographed routines and slick dance moves.

The setlist for the evening was packed with over 40 songs performed throughout the night. Selections of the set list included some of Presley’s biggest hits and all-time favourites. The show opened up with a rocking version of Jerry Leiber and Mike Stoller’s “Trouble.” Presley recorded “Trouble” back in January 15, 1958, for the film King Creole and the song was released later that year on the film’s soundtrack. One of my favourite songs by Presley has always been his number one hit from 1969, “Suspicious Minds.” I was super happy when the track made it onto the album 3764 Elvis Presley Blvd and watching Tanguay perform the song on stage was just as great!

Tanguay made sure to include a wide variety of Presley’s music. Presley was a dynamic artist who spread his musical talents throughout multiple genres such as country, rock, pop, and even gospel. Some of the more rocking hits that were included were; “Jailhouse Rock,” “Heartbreak Hotel,” “Viva Las Vegas,” “Hound Dog,” “All Shook Up,” and “That’s All Right (Mama).” Widely known for some great love songs, Presley recorded and released many wonderful ballads over his career as well. Many of those love songs were also included throughout the night; “Love Me Tender,” “Can’t Help Falling In Love,” “Are You Lonesome Tonight,” “Blue Eyes Crying in the Rain,” and “Help Me Make It Through the Night” were just a handful to name.

Tanguay always brings out her best energy when she is on the stage. With many of the night’s mega performances, it was the moments that were stripped down and showcased Tanguay’s vocals that were some of the most memorable. Incorporating Presley’s love for gospel music, Tanguay’s of “Amazing Grace” was one of the nights stand out performances. Presley was known for covering a lot of music in his time, and Tanguay included many of the songs that Presley himself had covered and recorded such as “Hey Jude” by The Beatles, or “Proud Mary” by Creedence Clearwater Revival.

Presley is no doubt a major influence on many artists, and definitely had his impact on the world. Tanguay performed hits such as “Blue Suede Shoes,” “I Need Your Love Tonight,” and “I Want You, I Need You, I Love You” in French and showed exactly how much of a cultural impact Presley was on the music industry. The show closed with a powerhouse rendition of the hit, “My Way” which had the crowd on their feet and begging for more. Tanguay wrapped up the show with an encore, singing one of Presley’s biggest hits, “Burning Love.”

Tanguay approaches each song with her own signature twist. Wanting to compliment the original version, Tanguay adds her personality with her arrangement of each song. Both the album and live show, 3764 Elvis Presley Blvd is a must see for fans of Elvis Presley. The passion and the personality that Tanguay puts into each song makes you fall in love with the music all over again. These are not carbon copy renditions, but a revival of beloved music. You can even check out a little teaser of the show that Tanguay put together right here. Tanguay will perform in Montreal and throughout the province of Quebec, and select Ontario dates over the next few months. As always, we are expecting this year to be full of surprises and you never quite know what project is instore for Tanguay and her team.