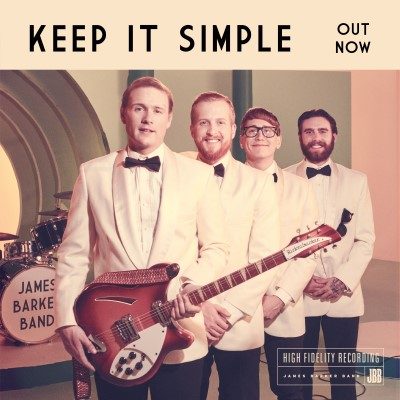 From the moment they hit the Boots and Hearts stage in 2015, the world surrounding James Barker Band changed for the better. Ever since winning the Emerging Artists Showcase they’ve been on a whirlwind journey, touring all over the place and signing a record deal with Universal Music Canada.

They’ve managed to accrue more than 35 million streams, four top 10 hits on Canadian Country radio, and three gold-certified singles. JBB had the most spun song by a Canadian Artist on Canadian country radio in both 2017 and 2018. And to top all that off, their album Game On was awarded “Country Album of the Year” at the 2018 JUNO Awards.

So it only makes sense that they took a little downtime to relax and reflect on the past few crazy years. But worry not because the guys are officially back with a brand new single “Keep it Simple”! It’s a grand tune that keeps in line with JBB’s musical works and I just know you’ll love it as much as I do!

“With this next song we wanted to push the boundaries a bit, which is something we take pride in, so people can definitely expect it to be a little different from anything we’ve released before,” he says. “A big thing that we take in to account with our music is how it’s going to translate live, and how it will affect our live show. Keep It Simple is really fun and upbeat, which, to me, means it’s going to be a blast when we play it live!”

It’s going to be another massive year for the James Barker Band so be sure you follow all of their socials and keep up-to-date with what’s going on so you don’t miss out on all their great adventures!