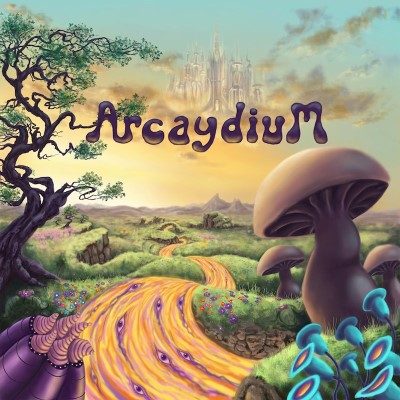 Montreal’s psychedelic rock/reggae band, Arcaydium will be releasing their debut EP later this year, but today we are happy to share their first single, “Flying” with you. The band also took some time out of their schedule to chat with us for our newest segment of Five Questions With, so check that out below.

Hey everyone, we are Arcaydium! We are from Montreal, Canada, and our debut EP comes out January 31. We formed this band so that we could create some sweet sounds to bring joy to the masses and help people escape from their everyday lives and travel to faraway lands. We consist of Chris Petterson on vocals, guitars and keyboards, Corrado Johnston on bass & bass pedals, and Rodrigo Ramos on drums & percussion.

We like to describe our music as “Psychedelic Reggae Rock”, but all of our songs are quite different. Throughout our self-titled debut EP,  we also touched on funk, classic rock and ska-punk. Some songs, such as “What a Shame” and  “Flying”, were written outside of rehearsals by Chris, and then we all finished them together as a band. Other songs, such as our funky psych-rock song “Journey” developed through a jam as a band, and then Chris added lyrics afterwards.

At the moment, we are taking some time off from live performances to write our next album. We do have a few radio performances and charity shows throughout 2019 planned, but no tour in the near future has been planned. During our sets, we like to party with our audience and encourage them to dance, sing along and get crazy with us. We are also planning to revamp our live stage show so expect a few surprises when we get back on stage later this year.

“Flying” was our first single, and it’s the best example of our “psychedelic reggae rock” sound, and it’s a good first song for people to listen to, which is why we put it as the first track on the EP.

Currently really huge fans of Montreal’s “The Damn Truth”, they’re absolutely killing it with one hit after another. Another band to keep an eye out for is “FOolish”. Their Psychedelic Reggae sound is both groovy and catchy, and they just released their first album a few months back. “City and Colour” is another artist that continues to make beautiful music.