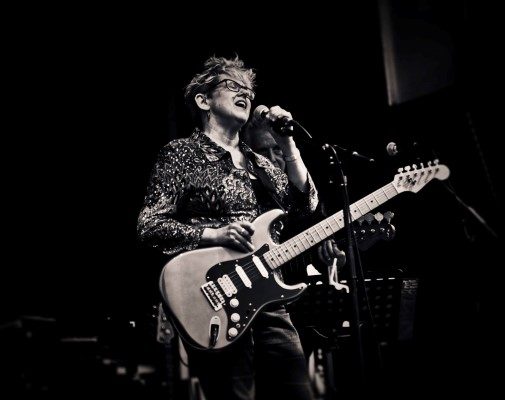 We were happy to catch up with her for our newest segment of Five Questions With!

I was born in Medicine Hat, went to high school in Calgary which was when I first began playing the guitar and writing songs. After I moved to Edmonton I began performing in and around the oil patch before I moved to Toronto where I spent 30 years in the Toronto music scene. While in Toronto I formed ‘The Judy Brown Band’ with renowned bassist Gary Kendall and performed at legendary Toronto music clubs and festivals and received radio and TV coverage. I appeared as a guest vocalist and co-writer on the song “Lucky at Love” on Kendall’s ‘Dusty & Pearl’ album (2004), and later I returned to electric guitar and co-formed ‘The Wilmas’ (all-female blues and rock powerhouse, 2010-2015). In 2016, I moved to Nelson, B.C. and have been performing regularly in the area with my terrific Nelson band, featuring Clinton Swanson (sax) Ralf Buschmeyer (guitar), Mark Spielman (bass) and Steven Parish (drums). Performing on festival stages is a blast (Southside Shuffle, 2018), and yet, I also enjoy performing in smaller venues and house concerts as a solo or duo. I’m a co-founder and on the board of the newly formed Kootenay Blues Society. There is so much great music going on in the Kootenays and I’m so happy to be part of this beautiful, creative and supportive community.

My main musical influences are roots-based music, including blues and traditional country, but my writing style is fairly eclectic. My new album ‘Say It’ is primarily blues based, however, you will find a few straight-up country tunes in the mix. For me, songwriting is slow, I like the lyrics and music as uncomplicated as possible, while still communicating the intended message. Writing songs with humour is one of my favourite things, especially with a writing partner. In the last few years, I’ve been enjoying co-writing lyrics with some of my like-minded friends and am finding that collaborating helps motivate me to write more.

I’ll be performing an official showcase at the Blues Summit Nine in Toronto on Friday, Feb 1st at 9:30 pm and will be appearing with my all-star Ontario band, which includes renowned blues musicians Gary Kendall (bass), Ted Leonard (guitar), Michael Fonfara (keys) and Jim Casson (drums). These are the core musicians who appeared on my 2018 release ‘Say It’ and it’s always a great pleasure to work with them. I’ve got a long history of playing with Gary and Teddy since I first moved to Toronto; I normally play electric guitar and like to play a bit of slide guitar. We have great chemistry on stage and the Blues Summit will be great fun.

Only one? That’s hard. A couple of my favourites from the CD are “Roberta” (a very fun groove to play), and “Free Range Man” (one of those foot-stompin’ country/roots tunes, with a great story).