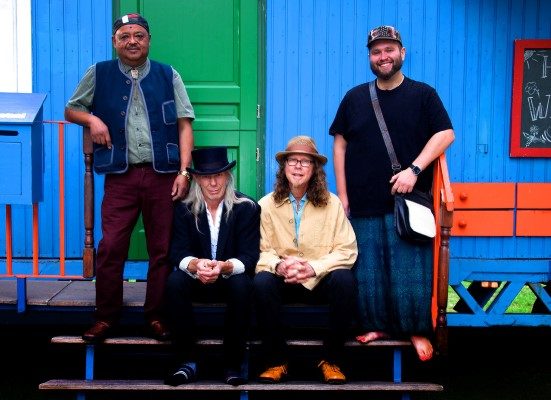 Formed in 2000, Tri-Continental is made up of  Madagascar Slim, Bill Bourne, and Lester Quitzau. The three have released a brand new single, “Dancing In Old Crow”.

“Near the end of a Home Routes house concert tour in the Yukon, I flew from Dawson City to Old Crow a day early because Home Routes & the folks in Old Crow had asked me to play at noon at the school. I did the school gig and then was instructed to walk the short distance to the house I was staying at in town. I headed out and immediately noticed some country music playing outside in the minus 30 weather. It was a stereo playing in a pickup truck that was sitting idling, with the window open, while a couple of fellas did some outside work in the school. You know it – the truck was running so they could hop in and warm up once in a while.  Thing is – the song was what I’d call an ‘old-time country song’. I couldn’t hear the words but the music inspired up the chorus to Dancing in Old Crow as I headed down the road. By the time I got to my accommodations, the chorus was going round and round in my head.  I read up on the history of Old Crow and wrote the verses over the next couple of days. Seems we never know where a song will come from.  If we’re lucky though, we’ll take notice and write it down.”

Check out the single below, and be sure to keep up to date will the band via their socials.

Share this:
Related ItemsCanadianCanadian BeatsDancing In Old CrowfeaturedNice Marmot PRpremiereTri-Continental
← Previous Story Kid Koala releases video for “Lost At Sea”
Next Story → PREMIERE – Across The Board releases video for “No Curtain Call”