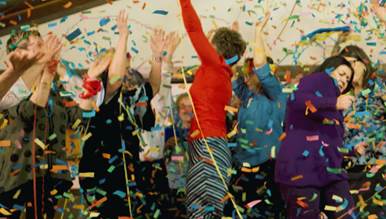 It might have been Friday night but The Sheepdogs were a day ahead in dropping a video for their song “Saturday Night” taken from their most recent album Changing Colours. Though the album has been out for roughly a year now. The track is just as catchy as it was when it first dropped.

The video for the single was co-directed by Mat Dunlap and bassist Ryan Gullen.

“I really felt the last thing the world needed was another rock and roll party video in the traditional sense, however, it really felt like the right thing for the vibe of the song. To mix it up I got together my Grandma, some of her friends and a bunch of other folks from Saskatoon. Knowing my 84-year-old grandma and the people she hangs out with, seniors these days live a much more exciting life than what we traditionally think. We wanted to capture this spirit in the video and, obviously, they still know how to party.”

The video and band itself show that no matter what age you are your never to young or old to have a good time and enjoy life with your friends. Check out the video and if you’re in Quebec you’re in luck as the band is hitting a mini-tour on the East coast.