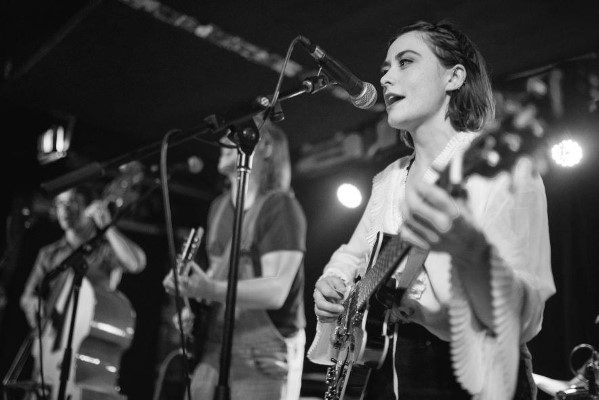 We caught up with Saskatchewan’s Ellen Froese, who will be touring alongside Campbell Woods and Nicholas Faraone for the upcoming YOUNGBLOODS tour from February 20 until March 3.

Find out more about Ellen via our newest segment of Five Questions With!

My name is Ellen Froese and I’m from a dairy farm in Saskatchewan. I grew up listening to a lot of Elvis in the house, but along with that lots of folky stuff too – Pete Seeger, Crosby, Stills, & Nash, Leonard Cohen. I work at the Broadway Theatre in Saskatoon and also still help out on my parents’ farm when I get a chance. I spend a lot of time working on music and a chunk of time travelling for it, but I’ve been thinking lately that I should learn how to build a house on the farm land and have a garden, learn some new skills, and get away from my computer screen a bit more.

I used to play lots of bluegrass, but I outgrew that a bit and wanted to play more traditional folk with a thumb-pick — and then I wanted to play only old-school rock ‘n’ roll. I switch around all the time. My last solo album was just me in my cabin with my guitar and harmonica, all recorded live in there. I just finished a new album that is a full band record and I am very excited about it. I think it will be a fun, groovy summertime rock ‘n’ roll/folk rock album. My writing is sporadic and it really reflects what I happen to be listening to around that time. I have been embracing cheesiness and thinking lately that if the melody is killer, then maybe the words don’t actually matter as much as I thought.

I’m opening for Terra Lightfoot with my full band for Winterruption – January 24th in Saskatoon and January 25th in Regina. My live performance is a mix of stuff – some folk rock, some 70s inspired ballads, some fast rock ‘n’ roll, some classic country. My band is a really random mix of musicians and I think the sound ends up being really fun and carefree. At the end of February I’ll be doing some solo tour dates in Ontario as part of DevilDuck Records’ Youngbloods Tour.

‘I Wish I Had a Foot-Long Cigarette’ seems to be the crowd favourite. I’ll get back to you with a new one once I’ve heard the proper mixes of the new album. I think I really like one that’ll be called ‘Fightin’ Words’.

I really love Ian & Sylvia right now. All the old classics – Joni, Buffy, Neil, etc. For current bands, I like Lover’s Touch, Wolf Willow, Kacy & Clayton, Aryn El Hefe. JD & the Sunshine Band is fun and they have such a cool backstory. I like pretty much all of the musicians I’ve met through my travels in Canada who are nice people and play from the heart.