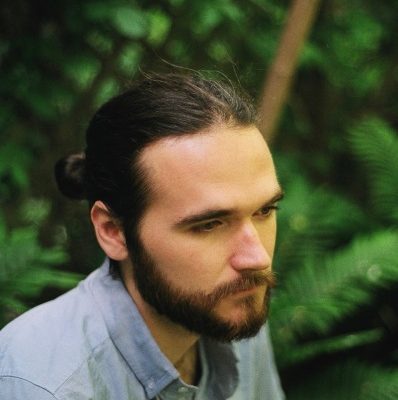 Ontario’s Campbell Woods will be taking off as part of the YOUNGBLOODS tour from February 20 to March  3 with Ellen Froese and Nicholas Faraone. We caught up with him for our newest segment of Five Questions With!

My name is Campbell. I write and sing songs. I put out an album in 2017, and since then have spent more time on the road than not, mostly in Canada with a few forays into America. I recently moved to Montreal, to work on a new record that will be out this year. Right now I’m excited about feeling rooted in one place again.

I love hard luck-stories that make the reader feel empathetic towards the characters. I love feeling like I’m being let in on a moment that is delicate and personal as a reader. I think that is ultimately where I approach songwriting from. Occasionally someone will tell me that they find my songs really sad, but I try to keep them as hopeful as I can. Musically, I’m inspired by story-tellers like Lucinda Williams, Guy Clark, and at the moment a lot of Jason Molina and Phoebe Bridgers.

Do you have any upcoming shows? For someone who has yet to see you live, how would you explain?

I’m going on tour in February with Ellen Froese and Nicholas Faraone. I saw Ellen play at Folk Music Ontario in September and I loved her set. I haven’t met Ellen or Nicholas yet but I’m really excited to do so and to get on that stretch of road between Montreal and Toronto.
I try and keep in mind that when I’m on stage I’m there to perform and to entertain, not just to showcase my songs. Sometimes I imagine I’m a juggler, to keep things lively. I try and balance out the melancholy of the songs with humour in between. Mostly I try to be myself and not think about what I’m doing at all. For this tour, I think I’ll be playing solo a lot, which forces me to stretch out and get a little bit more creative with my guitar playing.

I would suggest the song “Picture of You.” It’s new and it’s going to be on the new record.

One of my favourite albums of the last year was by El Coyote’s self-titled release, check it out!