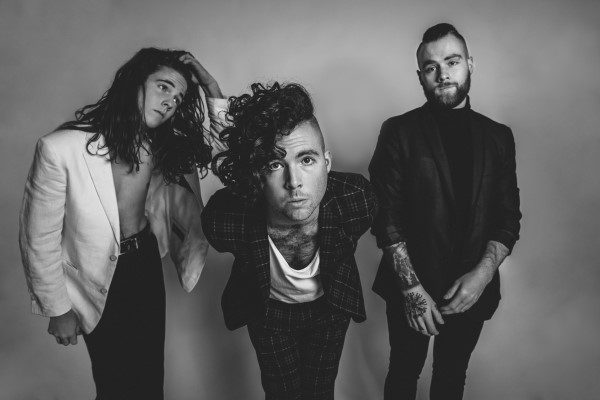 Vancouver’s alt-pop band, Her Brothers is made up of brothers, Levi, Josh and Gabe Penner. The three have just released their fourth single, “Innocent” along with an accompanying video.

The video takes us even further into the mind of Levi Penner, who crafted the sonic palette of the song and who directed it alongside Hugh Allen and Tim Bryce.

“Originally, we were going to shoot the video at an institution that dealt (not very well mind you) with mental health issues just outside of Vancouver – the Riverview Hospital. But when that fell through Gabe came up with this idea of him in a box, boxed in, eventually drowning with water filling the box. I loved the idea and thought we should run with it so we did… causing Gabe to go out and have to figure out how to get a box and fill it with water. I wanted to capture how isolating depression, anxiety or other forms of mental health struggles can be. Instead of us all being in the box I wanted to have just Gabe inside with Josh and I outside creating a very real barrier between us.”

The video was filmed in October, and caused lead singer Gabe to be in the water 6 hours in a full suit filming with camera man Hugh Allen, as they collected a series of underwater shots outside in the freezing cold.

“Hugh came to me the day of the shoot and asked if I had trunks he could borrow… but it was way too cold to simply shoot in trunks so I lent him my wetsuit that I was going to wear under my already heavy when wet tuxedo suit so he’d be warm… we both ended up freezing cold as the tank wasn’t heated and the weather was just above 0. This whole time Levi was directing dry and warm haha!”

Check out the video below, and be sure to keep up with the band via their social media pages.

You can catch Her Brothers on February 2nd at Vancouver’s Venue, tickets can be purchased HERE.