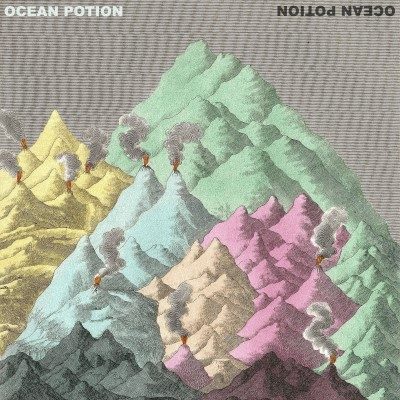 Newly formed Toronto based duo Ocean Potion recently released their self-titled first full-length LP. The duo consists of Mike O’Brien and Jason Haberman, individuals whom have graced the Canadian music scene as members of Zeus and Yukon Blonde respectively. They described their sound as “music for lazy days at home, for walks with headphones, and for sunshine through the car window.”

Ocean Potion began as a recording project where O’Brien and Haberman created “extended free form jams based around looping riffs.” As this continued, O’Brien would record a basic track and send it along to Haberman to add words and melodies. It wasn’t long before the duo had enough material to release a collection of songs. As a result, O’Brien quickly “dove into the mixing process – sifting through the many layers of synths, woozy guitars and dreamy vocals to find the purest versions of each song.

The album begins with a track entitled ‘Anywhere’ that seems to be very Beatles inspired. It definitely reminds me of something straight out of the 60’s/70’s era, with a very light and airy feel to the track. The addition of an 80’s inspired synth adds something extra to the track to keep the audience interested.Overall there seems to be a focus on the synthesizer and vocals, with a strong backing drum completing the sound.

Released as their first single in August 2018, ‘In The Grass’ showcases a psychedelic feel that is felt in most of their tracks. Again, this is a very 60’s inspired track with the synth sounds giving it a more modern feel. One neat feature of this track is the smooth vocals even with the overpowering music.

‘Rum Tape’  was one of the stand out tracks for me. It had a different feel than many of the other tracks on the album. This track has more of a Rock feel than others but very reminiscent of the 80’s. There is an interesting psychedelic feel towards the ending of the track, as if it wants to send you off into a dreamlike state. It aids in creating the feeling of a collaboration of two different tracks.

Leaving what seems to be a trademark 60’s sound behind, ‘Comma What’ takes on a more modern feel. The music overpowers lyrics, leaving us reminiscent of a dreamlike, floating state. The addition of calm, mellow vocals and lyrics, without any sense of urgency, adds to this dreamy state.

‘Reflection’ beings with a sound that is different then most of the other tracks. The 60’s vibe is thrown by the side to showcase some of their other sounds, almost darker and funkier than others. Towards the middle there is a neat little stripped down part, focusing on bass and drum, with a funky vibe to it. This is definitely a tune that stands out.

The last track on the album, ‘10 Out of 10’, adds another surprise to the mix – the addition of acoustic guitar. There is a focus on acoustic guitar, bass drum, and voice throughout the track. It leaves a memorable ending to the LP, as it is more stripped down than the others.The vocals seem to have a sound that is less ethereal than others. At the beginning of the track, piano sounds are added whereas their signature synth sounds are  pushed more to the background instead of being the main focus (as heard in other tracks). The synths become the main focus once again during the chorus.This was probably my favorite track on the album.

Overall, Ocean Potion seem to have a vintage vibe to their sound, creating music that will remind their audience of some of their favorite sounds over the years. If you are interested in hearing more,the duo is set to tour this year with Dave Azzolini (Forces) and Jay McCarol (Brave Shores) adding their talents to round out the band. Be sure to check them out!