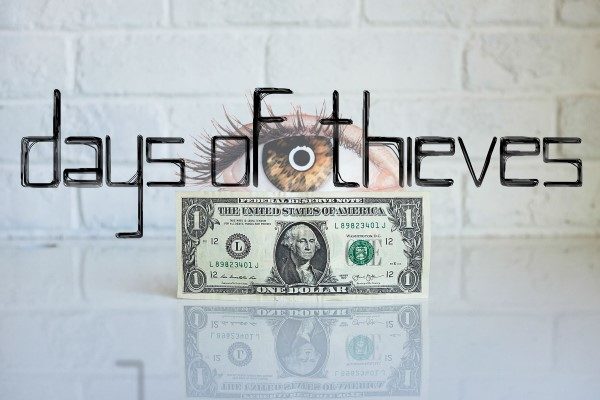 Days of Thieves, a 2-piece rock band from Kingston, Ontario, released their debut self titled EP in November 2018. The band consists of Mike Brown (vocals/guitar/bass) and Kyle Cochrane (drums). According to the duo, “Days of Thieves captures the intensity with hard-hitting rock and captivating lyrics that powerful messages about power struggles in the modern day.”

The EP begins with “Flag’s High”, a track with a sludgy feel. The bass sound is prominent in the track. It is mainly guitar focused, with the music overpowering the vocals. The dirty, gritty, sound creates a nice groove. The bass is also prominent in ‘Better Than a Blade’. The very thick sound, including the bass, gives the impression of several layers of sound. The harmonies in this track add a little something special to capture the attention of the audience.

“Defamed” has an interesting beginning with a nice fuzzed out riff. The long intro to the track allows the introduction of each instrument to be highlighted before the vocals begin. The addition of a very snarly, aggressive bass aids in capturing the attention of the audience.

“ Harvey” is a faster, more upbeat song when compared to others on the EP. The vocals are much clearer, leaving behind the rough feel found on other tracks. Towards the middle of the track there is a break with a stripped down sound, focusing on the guitar for high notes and lower notes from the bass. The sound becomes more frantic after this point, as the track comes to an end. This was definitely one of the standouts for me.

“Incoming” begins with an interesting intro that sounds like a siren (very Death From Above inspired). There is more of a sense of urgency than other tracks between the siren sounds from the guitar and the beats from the drums. This showcases their creativeness.

The EP ends with “Twilight Monster”. The track begins noisily, with many different sounds – pick scratches,banging on the strings, etc. More structure is soon added through the addition of a    guitar with a whammy pedal and a second guitar and bass playing lower notes. The vocals are interesting on this track, which aids in keeps the listener engaged. Towards the middle of the track the melodies become quieter before it continues to build up before the track ends. This addition also aids in captivating the audience, as they never know what is coming next.  This was, hands out, my favorite track on the album.

Overall, I am very impressed with the debut release from Days of Thieves. They did not try to jam pack too many lyrics into each track as they showcased their creative abilities throughout the melodies they created. The harmonies they added on each track, just added something a little extra to complete the track. According to the band, with the “thick chunky rock riffs with haunting catchy melodies, Kingston’s 2-piece rock band Days of Thieves promises to deliver.”