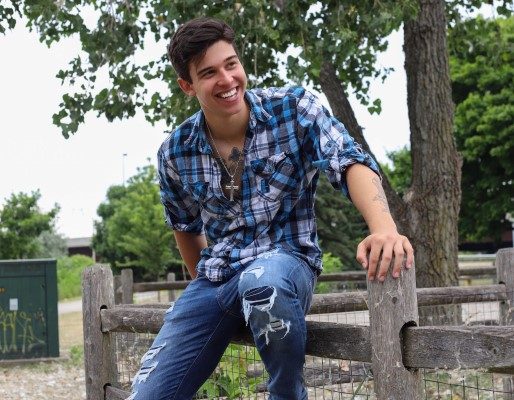 The Portland-born, Toronto-raised newcomer began his singing career after he was forced to end his hockey career, due to multiple concussions. Quickly realizing he had a passion for music, Bogle took to pursuing his new dream and hasn’t stopped working since. Growing up in a big city, he says he struggled with the confidence to transition into country-pop. His early work started in the EDM-pop realm before transitioning, something he is thrilled to say his fans have embraced wholeheartedly and gives him the confidence to pursue it further.

Bogle co-writes all of his songs, and he says working with seasoned songwriters has really helped his development; recently he’s looked to co-writers Alexander and Gabe Gallucci – who has been involved with writing with the likes of Danny Fernandes and Shawn Mendes.

When asked about his musical influences, Bogle counts some of the biggest names in modern country music for inspiration; like Thomas Rhett who he says is “such a great lyricist” and Luke Bryan’s ability to entertain his fans, both qualities he hopes to emulate in his career. He also looks to John Mayer as a songwriter and guitarist. Not to be left out, he counts his Mother as his number one non-musical influence, raving “She has devoted so much time to driving me to lessons and small gigs earlier in my career. I probably would have given up a couple years ago if it weren’t for her pep talks.”

When he thinks about the year ahead, Bogle says he hopes to really breakout and earn the opportunity to open for a few big players and festivals. With big dreams ahead, keep your eyes and ears open for more from Cam Bogle. You can find his music on Spotify, Apple Music, and iTunes.