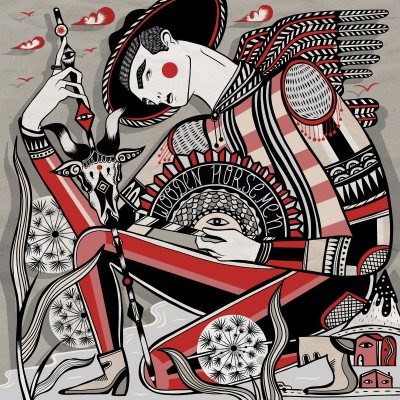 Vancouver, BC-based band Wooden Horsemen have had a huge lineup change over the last 5 years. Starting off as 2 members, the band has grown into a 7-piece folk rock outfit who’ve released their newest album Past Lives on November 2. The band is building off of the success of their EP Sentient, released in 2016, with the release of this album.

“Lies” starts off the album in a very funky way. The drumbeat immediately caught me followed by the unique sounding vocals of lead male vocalist Steven Beddall. They have a raspy yet higher range to them which isn’t something you normally hear. Since this is the song they released as a single, with an accompanying music video, this is a good way to get people introduced to the band.

“It Don’t Matter” has a modern country vibe to it while keeping its own style to it, especially the brass solo in the middle of the song. It has great lyrics to keep people interested and a hook throughout to get people involved and moving when performed live.

“Wish You Could” has the coolest guitar intro I’ve heard in awhile. It’s a simple yet so catchy riff. The entire song is a 4 minute bubbly, uplifting experience. The catchy vocals, the keyboard verses and the brass/guitar interludes between parts make this my favourite on the album.

“I’ve Been Changed” is the closing song on the album. It has a slower, dark vibe to it compared to the rest of the album but makes the album a great ender as you aren’t expecting the epic of an end with the beautiful, harmonic vocals of both vocalists and the simple guitar and drum beat.

On par with their last release, Wooden Horsemen have found a genre they can call home with this release. The music throughout has something for new and old fans to enjoy and there is a song within for everyone.