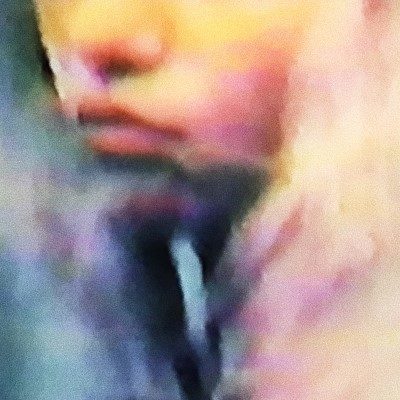 Lesser Evil is the new self-titled EP from Montreal the based band.

Recorded in a RV in the middle of the woods at an undisclosed location without electricity, running water or Wi-Fi, the EP is appropriately eclectic, if not ominous.

The EP kicks in with “V.W” where haunting lead vocals accompanied by a sleepy acoustic guitar to trick the listener into thinking what will follow will be an eerie, but smooth ride. Electronic synths and aggressive saxophone then kick in and out of the first two tracks like a pursing slasher monster while the lead vocals act as a siren song to keep you in your place. In fact, the first two songs of Lesser Evil would not be out of place in a Panos Cosmatos movie or French new wave horror. The songs are aggressive, electric, industrial – in short, these songs are out to get you.

The tone of the EP then changes dramatically in “Sight Of” which has almost an extraterrestrial disco feel. A slow, but funky electronic base pairs well with rising chords that could make the listener imagine being beamed up to the mothership dance floor.

The EP then wraps up with “Cobra Effect”, which is sleepy, subtle track, but still imitating its own form of horror. Downbeat piano, mournful lyrics (some sung and some whispered directly into the mic) and pulsing synths melt into a creeping melancholy – as if Jason really did catch up to the listener in the previous tracks and now Lesser Evil is mourning our tragic, but inevitable passing.

In short, this EP is scary good, but maybe not for the feint of heart.