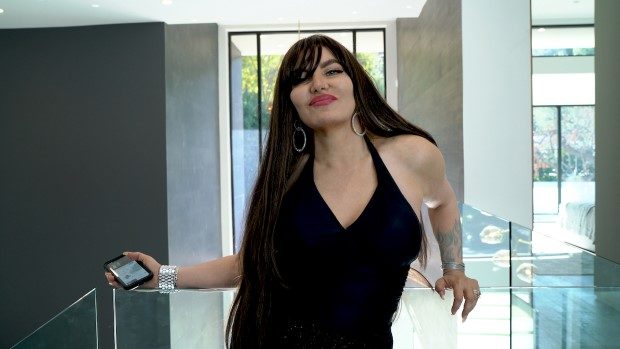 Originally from Toronto, now based in Los Angeles, Betty Moon has released a music video for the new single, “Waste Your Time” off the arist’s 8th studio album, Chrome. Check out the video below and find out more about Betty Moon in our new Five Questions With segment.

Of course, I’m Betty Moon and am from Toronto and currently live here in Los Angeles, CA. To those that need the quick intro, I am a producer, songwriter and run a music company called Evolver Music, Inc. I have a new single/video out for a song called “Waste Your Time” and it comes from my 8th studio album ‘Chrome’. As I type this, I’m in the studio on break from finishing up my new album for a 2019 release.

Ah, this one is so hard to pin down! I grew up on rock n’ roll, so you’ll hear a lot of that influence in my music regardless of the genre or direction. I tend to get my ideas out by myself at home or in the studio, then collaborate with my inside team of incredible musicians and industry songwriters. I’ve been fortunate to work with some of the industry greats, and sometimes my favourites come from a team effort, and others are just myself writing completely on a piano, acoustic or crafting on Pro Tools till the early hours of the morning.

We’re working on some festival and special live shows for 2019. When someone comes to a Betty Moon show, it’s really an experience with everything you’d want at a rock show. We always play at great locations and throw a party for the guests so it’s more than just a handful of live songs and a couple of beers at the bar. The live show is about giving them something to remember, and even throwing in some covers for good measure (Depeche Mode, anyone??).

I immediately think of “Sound”, maybe because it was just featured on a major TV show last week, or perhaps because it’s my favourite at the moment. It’s just a feel-good track, a bit more on the electronic side of things, and it pushed me to evolve my sound and further focus on my message. If you jump on Spotify and don’t know about Betty Moon, you’ll realize most of my music is rock, and I want fans to know the rock n’ roll soul still lives on even in my newer music which is more electronic/pop influenced.

Some of my more modern Canadian favorites are The Weeknd and Drake. I just can’t get their music out of my head. And I will still throw on a little Neil Young, Rush or Joni Mitchell if I’m feeling nostalgic.