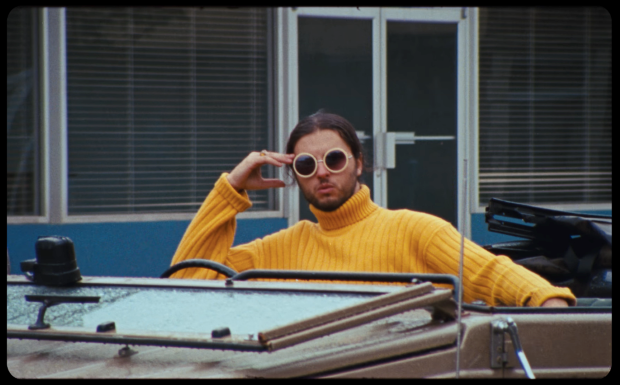 Vancouver’s Old Man Canyon recently released their video for “Run Away”. Filmed on the fake New York City movie set from Deadpool and The Watchmen by director Geordie Starr. The video provides a fittingly dreamlike visual accompaniment to the sun-warped electronic pop sound and lyrical themes of their new album, A Grand Facade.

“The day before we were scheduled to start filming the video, we got news that we had permission to shoot for one day at this incredible New York street movie set here in Vancouver that was used for Deadpool and The Watchmen. It was sort of miraculous, as the whole layout and vibe of the fake city streets and buildings fit perfectly into our vision of what we wanted the video to try and capture. We shot the entire video on 16mm film and used a blend of natural light and a zoom lens with camera dolly techniques to achieve its look and style.”

Old Man Canyon share on the the song and video,

“Playing with the themes on the song and album everything seen in the video, from the streets to the movie theatre, is a facade. We wanted to really highlight that it was all fake by including shots of the crew working or dolly tracks being set up in the background, as though the video was being shot amidst the pre-production of a huge Hollywood film. The overall concept was to really instil the notion that not everything is what it seems from the outside, and that sometimes we need to take a peek behind the walls to see what’s really going on.”