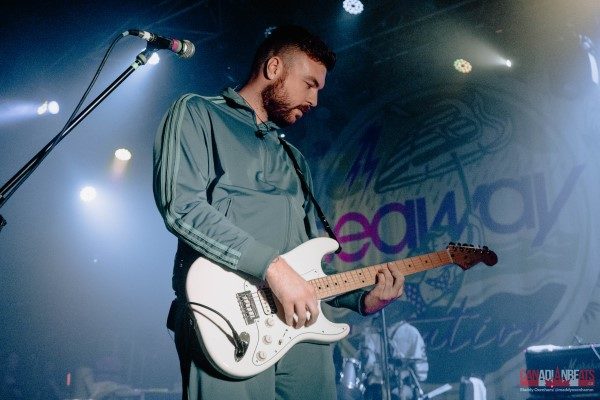 The 3rd Annual Holiday Shaker started off with Michigan’s very own, Hot Mulligan. Their music was great to get the crowd pumped up for their set and for the rest of the evening! Their music is so incredibly edgy and had a great beat it had everyone in the crowd dancing and moshing to each word. When their single “Dary” started the crowd went crazy; their fans were so incredibly excited to hear and see them play that when their set was over you could feel the disappointment to see the band leave the stage.

Can’t Swim came on next and we were not ready for what they were about to bring us; as more people trickled into the venue, mosh pits and headbangers gathered and prepared themselves for a night they wouldn’t forget. Can’t Swim ended their set with their song “Stranger”. It was a great end to a high energy set and really raised the bar for what was to come for the rest of the evening.

Microwave was the third act to go up and what a great place for them; they brought a much more mellow vibe than the other bands so it really brought you back down to Earth. Their lyrics were so incredibly moving and they really allowed for you to take a step back and appreciate everything you had that evening. As the evening progressed you could see the line up was curated perfectly to allow concert goers the perfect time.

As we were anxiously waiting for Trophy Eyes to take the stage, the room was buzzing; people were waiting for Australia’s own to rock Toronto’s Opera House. Their lead singer, John, was absolutely captivating. The way he dances and sings around the stage keeps the energy high, the crowd moshing and the ones who don’t mosh singing and dancing.“More Like You” came on and John was able to have the audience moving exactly with the beat. Their set was winding down and all of a sudden we were graced byPat from Seaway who came out to help John! We were unfortunately in capturing any usable shots of Trophy Eyes, but trust us when we say, the performance was stellar!

It was the moment we had all been waiting for; we heard the true story of Christmas and the Holiday Shaker. Once we were enlightened, Seaway took the stage; some dawning their true Toronto Maple Leafs jersey and others ready to rock. Once they got into their set, the chords and beat for “Something Wonderful” and the crowd lost their minds. People were singing, dancing, moshing and overall feeling the holiday spirit. The band played“Everything’s Cool” and opened up one of the biggest mosh pits I have ever seen at a concert; the amount of respect and fun you could see by the participants is a testament to the atmosphere of the event. Their set ended with a holly, jolly Santa Claus slap shotting merch into the crowd and it was absolutely wonderful.