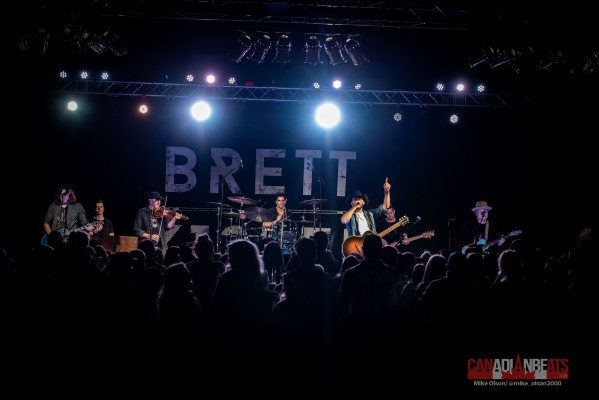 After starting the day off with numerous setbacks caused bymother nature on December 6, 2018 in Drumheller Alberta, CCMA and Juno Awardwinning, Brett Kissel, and his band of highly accomplished musicians took thestage at the Badland Community Facility; promising us a night we will neverforget. They did not disappoint.

Brett Kissel and the band took the stage for a sold-out venue and started the night with “We Were That Song”, enticing everyone to get out of their seats and enjoy the night. The crowd sang along to every word.

“Guitars and Gasoline” was followed with a story of his roots of growing up in Central Alberta and the life on the farm, before he rolled right into “Canadian Kid”. He payed homage to Canada by his rendition of “O Canada” while proudly holding up a Canadian Flag high above his head.

His first number 1 single on Canadian Country Music Radio “Airwaves” brought a thunderous roar of screams across the venue that had everyone belting the lyrics of the chorus. After a brief introduction of the band, they rolled into a melody of country music biggest hits starting with Shania Twain’s “Man! I Feel like a Woman”, John Michael Montgomery “Sold”, Dixie Chick’s “Goodbye Earl” and Brooks & Dunn’s “ Boogie” and he even included a Boys II Men cover of “I swear”. The crowd was loving it.

As the night was coming near to the end, he played his new singles “Cecilia”, which was dedicated to his wife Cecilia, and “Anthem”. “Damn!” kept the energy flowing through the audience as well as the Canadian classic hit from Great Big Sea “Ordinary Day”.

Brett ended the night with his first two singles that helped him garner his first Juno award for “Started With A Song” and his first CCMA award for “3-2-1″.  A cover of John Denver’s “Thank God I’m A Country Boy” closed the night off as a big thank you to everyone who has influenced him along his journey to where he is today doing what he loves.

Playing his 111 out of 112 show of the We We’re That Song Tour, didn’t show any wear or tear on the band or himself. After seeing the accomplishments Brett Kissel and his band have garnered over the past 4 years of working together, they are constantly proving that hard work does pay off.

mikeolsonphotography.com/
Share this:
Related ItemsAirwavesBrett KisselCanadianCeciliacountryDrumheller ABfeaturedInvictus EntertainmentStarted With A SongWarner Music CanadaWe Were That Song
← Previous Story IN PHOTOS – Stars & My Brightest Diamond in Waterloo, ON
Next Story → IN PHOTOS – Long Range Hustle in Toronto, ON