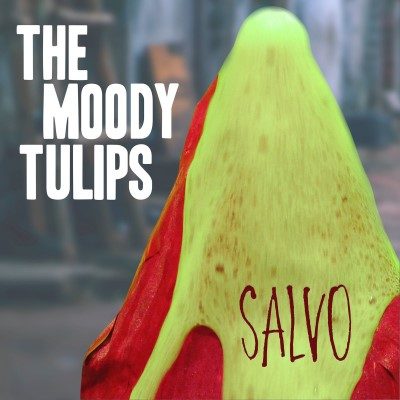 Hailing from Toronto, Ontario, 4-piece The Moody Tulips dropped their second EP Salvo in the second week of October. An anticipated follow-up to their debut EP Snarky Baby, the garage rock band is out to set solid ground in their genre.

Starting off with “Inside Out”, it has similar stylings to California surf rock like the Butthole Surfers. I know that’s an odd comparison but the style of music they have was unique and different compared to a lot of the bands on the scene at the time, and The Moody Tulips fit that mould perfectly.

“On A Wire” & “Question at the Back” have a very Dead Kennedy’s feel to it, speedy guitar riffs, with higher vocals and the midsong catchy breaks with the guitars. The most interesting song was “ Fine” as it is slower than the rest of the songs but not by much. It’s a song where I can catch myself bobbing along and it really caught me off-guard when the female vocals came in. I was so used to the male vocals when the female came in, I was pleasantly surprised for how short it was.

The final song “Jerk Around” is 2 minutes of simply great garage rock music. The guitar work in this song is very notable as compared to the last few songs, this one goes outside of the guitarist normal tone and tries some new and great tones throughout.

For their second EP, The Moody Tulips have planted themselves firmly into this genre. The album is a good taste of what this band has in store for the future and for one am excited to hear it.