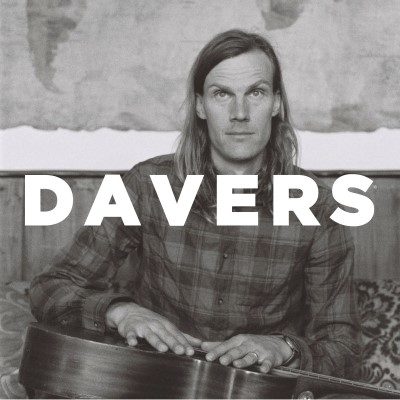 David Lang is a Victoria-based musician and a founding member of touring group Current Swell. This week he is celebrating the launch of his new solo project Davers. Oscar St. Records is releasing his debut EP on November 23rd. David kindly agreed to answer some questions about the EP and his adventures into solo work.

After the past decade of working with Current Swell, what interested you about beginning solo work? How are you finding it compared to working within a group?

I’m finding the work/ creative cycle with Swell just so long between albums that I had too many songs that I loved backing up and keeping me up at night, literally like I was going crazy… a lot of the type of songs that wouldn’t fit on a Swell record at that point in time due to the bands focus on rock/ commercial appeal, not that it’s a bad thing but I felt like we were a bit lost at the point I decided to make my own album. The main plus when working alone is the ability to have a direct connection personally to the recordings and the music… because you don’t ever have to share or compromise… there is no medium between the mind and so in that way intensely rewarding. Of course, the drawback is that in those moments as I can with Scott when recording with the Swell…so that’s the difference. For me it’s something that will be in my life , you know, making records for myself… like musical therapy.

Your single “I Watched You Grow” is quite explicitly about fatherhood, and you can actually hear your kid laughing at the end of the track. Can you talk a little about what writing that song waslike? Do you think it’ll be interesting for your kid to hear that song oncethey’re older?

The song was so easy to write, I mean the melody just popped into my head and the lyrics are just from the heart… As soon as I had the melody I ran to my friend mike’s studio across the street from me and was like, I need to demo something NOW! I usually know I’ve got something special when I tear up while writing it, because I wanted my daughter to hear it one day and be proud and reflect on the lyrics and know that although everyone can relate to the feeling of the song, it’s for her. It’s her favourite song now!

Between “I Watched You Grow” and”Brother Brother,” this EP plays with a lot of themes of family and companionship, was that something you set out to write about on this release just come forth in the composition?

The album is as personal as I could make it. Like when I was recording it I was purposeful about making this for myself, as a sort of release of the mind. Alot of what is on my mind is family with me becoming a dad and the last coupleyears have been a lot of ups and downs, so what’s important just comes to thesurface. “Brother Brother” is as introspective as it gets for me soit’s a great lead song for the record.

This EP has a really warm, nostalgic folk feel. Did you have any strong musical influences in building that sound?

I was really inspired by Andy Shauf and the warm dark arrangements he put together a couple years ago, Jon Middleton and his side project Ocie Elliot, as well as some darker M. Ward songs…. that type of stuff where you can turn off and just give in can make you feel so vulnerable to create. Listening guys helps me feel inspired… like when making the song “Put Your Pain OnMe”… it’s so dark and vulnerable, it’s hard to be exposed like that.

Extending that last question, Victoria and the island are home to a strong folk community and many talented folk musicians.W hat do you think it is about BC that attracts folk music? Do you feel as though living here, or living in this community, has shaped your approach or relationship to music at all?

Certainly, it did when I was younger. It was a huge inspiration and still is in a way, but now when I’m home and not on the road I’m not going out and participating in the scene as much as I used to. The island will always attract the dreamers from the rest of the country to be inspired by the dramatic nature and island lifestyle…maybe that’s what keeps the folk scene going, a lot of interesting people trying to share their feelings and stories.

Any upcoming shows you’d like readers to know about?

I’ll be doing Song and Surf Music Festival Feb 15-18 in Port Renfrew BC as my debut appearance with this record and I’m really excited to be invited (Sorry, festival already sold out).