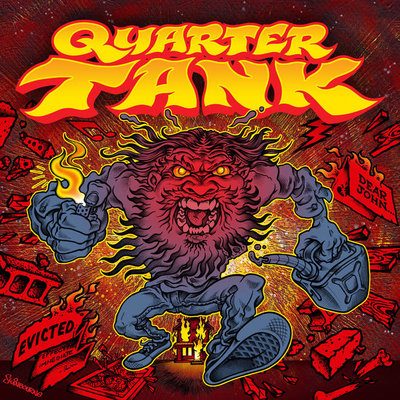 Quarter Tank is spearheaded by a talented group that are no strangers to the Toronto music scene, with Dean “Deaner” Glover (drums/backing vox), Jesse Mackowycz (bass/vox), Johnny McNabb (guitar/backing vox) and Billy Gregory (vox). Having formed in 2006, the group spent many years perfecting their sound and releasing a few demos before releasing their first album

Quarter Tanks second album, IGNITER, was recorded over a seven-month span in 2017/2018 at Green Door Studios in Toronto. According to the band, “IGNITER is a 20-minute affair that’ll make you press play over and over again.”

The album’s title track, “Igniter”, opens the album. It is a solid rock track that will captivate the audience with the sense of urgency you feel as the music plays. The catchy riffs, along with the guitar breaks before bringing in a multitude of layers to create a fitting sound, will keep the audience wanting more.

“Quarter Tank”, one of the stand out tracks for me, graces us with layered guitars that will leave you hanging on to every note. This track is reminiscent of an anthem, giving the impression of a night out at your favourite venue with your favourite band rockin’ out on stage as the audience fist pumps along to the lyrics; “We stand, we fall”. This high energy track is destined to be a hit.

Their first single, “Mean’r”, starts out a little bit slower than other tracks but don’t be fooled. It quickly brings up the tempo and creates the sense of urgency that can be found throughout the album. The lyrics boast something about being back in control but it is counter-intuitive to the actual tune, as the music continues to sound pretty frantic.

The last track, “Rock Hell”, is a stand out from the track. The beginning is more laid back, almost giving you the feeling that they are saying their farewell (but not goodbye). It gives the impression that they’re having a great time as they engage the audience and keep them wanting more. You can almost hear the chant of “encore” as they finish up their show.

Quarter Tank definitely left a lasting impression on me. Their sound, especially the urgency, reminded me of some of my favourite artists and tracks. Why not give this album a listen? It could very well make its way into rotation as one of your favourites.

If you live in the Toronto area you are in for a treat! Catch Quarter Tank live at their video/record release party on Thursday, December 6th at Cherry Cola’s Rock ‘n’ Rolla Cabaret & Lounge.