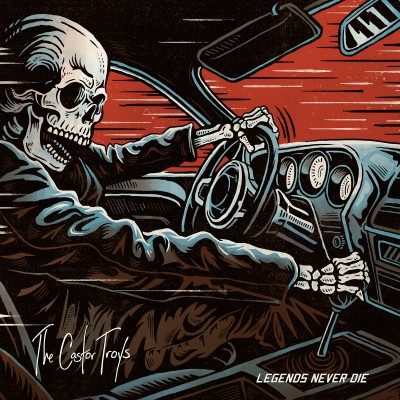 Hot off the heels of opening for The Headstones and an explosive release party, Hamilton, Ontario’s The Castor Troys have released the follow up to their 2015 debut, Come Hell Or High Water, with Legends Never Die. The six-track EP is rooted in their known punk style but see’s the band welcome a number of modern and classic rock influences, making for an exciting new direction for the band.

Opening with the hard-hitting riff and drive of “Blackout Love”, The Castor Troys waste no time setting the pace and raising the bar for the next five songs with a catchy as hell chorus paired with a hard-hitting verse reminiscent of The Offspring, circa 1994. This in itself comes naturally for the band as they tackle some of their heaviest material with choruses which one could easily hear sung back by a packed arena of fans. My two favourite tracks, “Watch The City Burn”, and the title track – inspired by infamous Canadian bank robbers, The Stopwatch Gang – are no exception. The former kicks off with a sweet riff with a bluesy inspired verse before diving head first into a massive chorus while the latter is an edgy punk banger intone of The Offspring and Social Distortion as they tell the epic story of so of Canada’s most notorious outlaws.

The EP comes to a close with two of their most juxtaposing, yet complimenting, tracks. The first of the two is the blistering and unrelenting pace of “Wreck Of The Bastard” which tells the story of a Canadian Spitfire pilot in the heat of battle in World War Two. While the punk tone and intensity of “Wreck Of The Bastard” can also be found on their closing track, a cover of Tom Petty’s 1989 hit, “Running Down A Dream”, it is very interesting to see The Castor Troys embrace a clear roots and blues influence of Petty as they make it their own. Initially released as a single before his passing, “Running Down A Dream” is a thrilling conclusion to a very strong sophomore record.