Five Questions With The Flakes 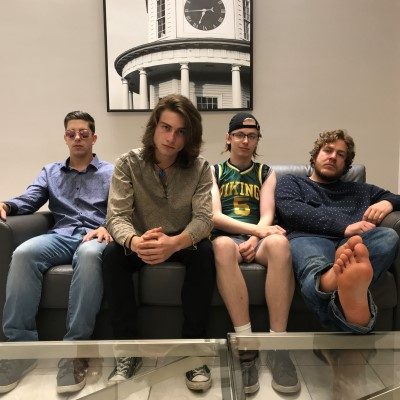 Photo Supplied by The Flakes

I recently had a chat with Halifax, NS-based band, The Flakes. The four-piece alternative rock band has strong influences from The Red Hot Chili Peppers to the Strokes to Cage The Elephant. Give the new single, “Close to You” a listen, and take some time to find out more about these up-and-comers via our Five Questions With segment.

Tynan: I tend to write what I’m feeling. Which can be a blessing and a curse. I remember once Adam and I were writing and he said he was sad that my “heartbreak phase” was ending because we had gotten some good lyrics out of it. From an instrumentation standpoint I really like funky rock riffs so that’s what I aim for when workshopping songs.

Adam: Our writing style is pretty cool and organic. Sometimes I’ll bring melodies I come up with on my guitar to band practice and we’ll create jams out of them- vice versa, Kyle brings tons of beats and Nash will play something on bass and all of a sudden a song is born. Probably 90% of our songs on this coming album were born in a jam. Once the instrumental has some kind of formula, I’ll sit down with Tynan and we’ll try and make some lyrics. The greatest feeling in the world for me personally is creating- walking into the room with your best friends and leaving the room and there’s a new song.

Kyle: Our music is a rocky whirlwind, from every spectrum of rock. You got your fast and ambitious type songs, as well as soft rockers. Our writing style is kept simple and not overly complicated. We try to create something from feeling and something catchy, and really just do what we wanna do.

Nash: Our music is very 1990s meets early 2000s. We are influenced by the Red Hot Chili Peppers, The Strokes, Kings of Leon, Arctic Monkeys, and Cage The Elephant.

We’re playing a Beatles set as the Sgt. Peppers crew on a parade float on November 25th.

Tynan: Super sick and not worth missing, come see us. p l e a s e !

Adam: I think our live performance is pretty cool. We’ve all got such wide tastes in music, so a lot of our songs are vastly different- there’s a pretty wide variety during a set. We’ve also done improvised jams leading from one song to the next on various occasions- It’s like driving with your eyes closed, not knowing where something is going to end up, but it’s a lot of fun.

Kyle: We’re a really energetic band, and love jamming with each other, we have a lot of charisma on stage and our songs are catchy enough to make your head bob-up and down. And just like any other rock show- loud!!!

Nash: Our live performance is weird but fun. Energetic, but yet still controllable.

Tynan: ‘Through The Night’ because it’s the first Flakes song that I had a hand in writing. It hasn’t been recorded though so you’ll have to come listen to it live!

Adam: My favourite song thus far is ‘Lust’. It was our second single, and when we play it, it makes me think of the sun and being in love and happy summertime stuff. I think it’s our catchiest song.

Kyle: So far I would suggest the song called ‘Close to You’. It’s a fast paced song that leaves you with a feeling of extra confidence by the end of it, wanna rock with the windows down? This is the one

Nash: Our first single, ‘When I Get It’.

Tynan: I love going out and listening to local bands. Hello Delaware, T. Thomason, June Body, SHITBAAG and Matt Steele and the Corvette Sunset are a few of my favourite Halifax artists. We played a show with Fade Awaays a few months back and they were super sick! And Rush is one of my all time favourite bands.

Adam: Andy Shauf- I think is one of the coolest and most talented Canadian songwriters. As for locals, Scott Nicks was the coolest, but I don’t think he plays around anymore… String Of Dreams is one of my favourite albums, it’s been in my car for years, and I listen to it all the time.