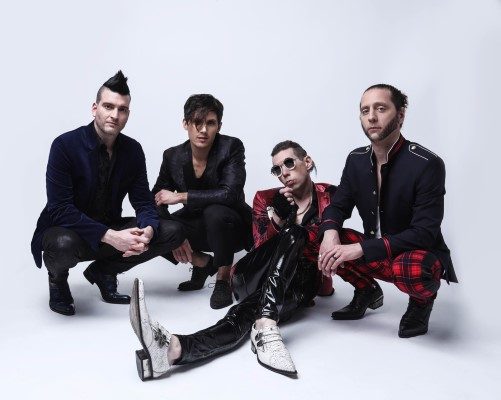 12+ years into their career, you would be hard pressed to find someone who hasn’t heard of Vancouver’s Marianas Trench. They have been teasing their fans with hints about their upcoming fifth album which is seemingly getting closer with the release of the lead single “I Knew You When” on November 16th. It’s impossible to class the band into just one genre with their sound changing between each album. The newest song is very vocal heavy and different than any of their previous releases, feeling more like a pop/dance song than their previous more rock-driven sound. We had the opportunity once again to ask the band a few questions about their new music and everything that comes along with a release.

“I Knew You When” has a very different sound and feel than the previous album, Astoria, and even more so than your three other albums. Were you at all nervous that fans may not like the change?

We are really fortunate to have an incredibly loyal fanbase. They are very open musically. Over the years, our sound has changed from one album to the next and their support has only grown. With that being the case, it has given us the freedom to explore songwriting options and song styles in general. We always hope that the Trenchers will enjoy our latest music and by being able to expand our creative process, I believe it helps us bring out the best in us.

When you performed at Big Red Fest in Charlottetown, PE in 2014 Josh played a verse from this song as a teaser for the crowd, has it changed much from then?

The song really has changed since that festival. At that time, it was just a song sketch and that was presented only as a guitar and vocals version. The final iteration that you’ll hear on Friday (November 16th) is more evolved, current and crafted with much more attention paid to the details then the version heard in PEI.

Does the rest of the album follow the dance/pop feel of the single?

Not surprisingly, this album really covers a wide range of sounds like our previous album. You’ll really have to dig into it all to see where we’ve taken this generation of Marianas Trench’s music.

Josh has teased fans by answering some of their questions on Twitter, one of which alludes to the new album being inspired by the likes of Edgar Allan Poe and horror movies. Can you possibly expand on what this means? Is the album ‘darker’ than previous releases?

In the past, we’ve used settings to help establish a creative “world” for the music, touring and album packaging and artwork. In this one, we’ve been exploring and developing a new realm that indeed does have a mysterious and dark vibe. That being said, the music suggests to that realm while still being diverse, upbeat and positive when it’s right for the song.

Josh seems to have an affinity for vintage and eclectic instruments, are any of them incorporated into the album? If so, which were the most fun to work with? Are there any others you wish you could have worked with?

We’ve definitely explored a few new instruments or two on this album that haven’t been used in our past. We’ve also found new ways to use familiar instruments to present them in a new way. We’re always looking for more new instruments to help capture a song or inspire a new vibe.

Can you give us any other hints about the album? Perhaps any inspirations behind the songs?

I think the listener should hear the new music and decide what the songs mean to them. I think the main theme will come through when you listen to the songs as a collective but each song will also have its own story to tell.

Are you able to tell us a bit more about the upcoming tour, such as where you might be going and what fans can expect from the live performance?

Our upcoming tours will cover Canada and the USA with lots more to come. We can’t wait to present the new music to a bunch of cities to start with the goal of reaching as many new places as possible during the album cycle.

What can fans expect from you guys in the New Year?

2019 will be a year with lots of new music, lots of touring and hopefully lots of good memories for us and our loyal Trenchers as we explore another chapter in our lives together.