Five Questions With Naming The Twins 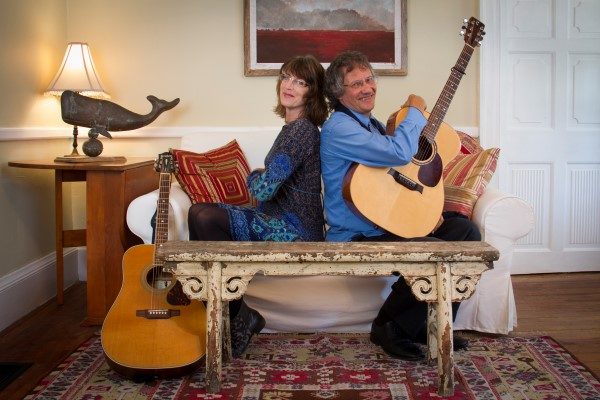 East Coast folk duo, Naming The Twins is made up of Kath Glauser and Robbie Smith. The two released their fourth full-length album entitled Sing The Winter Away on November 9. Although it is a seasonal album, it is an adaptable collection of original tracks that you need to check out.

On top of this, they have many upcoming tour dates which you can check out below, and if you’re able to, we recommend you catch a show.

Below, you can take a look at a short video showing the making of the album, and single video “One Storm From Home”, plus find out more about the duo in our Five Questions With segment.

Who the heck is Naming the Twins?

Let’s start with Robbie, an only child, who always longed to have a brother or sister. Music came to him naturally. How can you not end up writing and arranging songs when you live in an extended family where your grandpa wakes you up each morning practising the piano parts he used to play for the silent films, your mom is singing opera, and your uncle is perfecting rhymes for his ballads and ditties?

Why Folk music? Robbie’s dad was sent on assignment to photograph Gordon Lightfoot in 1968. “Who the hell is that?” his dad asked. To which Gordon reacted by sending him home with a stack of his LP’s. Those albums became Robbie’s prized possessions, and to that stack he added Pete Seeger, Stan Rogers, and Pentangle, to name a few.

Meanwhile, Kathleen was spinning the harmony-rich sounds of Ian & Sylvia, Peter Paul & Mary, Simon and Garfunkel, and even her dad’s barbershop quartet, on her turntable.

Ten years ago, Kathleen paused from running a successful restaurant, listened to Robbie’s songs, blew the dust off an old guitar, tried out some harmony with him, and promptly gave him a swift kick in the behind, saying, “Let’s get your gorgeous songs out there.” Bingo! There she was – the “Twin” sister Robbie had wished for.

It’s folky, it’s fresh, it’s bright, it’s breezy, and it’s always brimming with harmony. As a radio host recently said, “Naming the Twins is special in so many ways.. fresh messages, superb harmonies and impeccable arrangements… it’s just so happy… sure, there are a few serious offerings, but they, too, are expressed nearly perfectly.” (Jim Wombolt, CIOE 97.5 www.communityradio.ca)

Kathleen is very new to the writing scene, whereas Robbie has been writing songs since the late 1960s, several of which were picked up by Roger Whittaker in the late 1970s.

Robbie says, “To me, the most compelling songs are deceptively simple – very accessible from the start, memorable and melodic, yet with an undercurrent of satisfying originality. They draw you in, and as soon as they’re over you want to listen again. Examples of that would be some of the songs from The White Album or Abbey Road or Bridge Over Troubled Water. They sound simple upon first hearing, but just try to play them accurately. Lots of complexities in there.

“I search for, and sometimes wait for, original sparks to set my own writing in motion – some unexpected shift of the bass line, or some unfamiliar sequence of chords, or some unusual interval that sets the new material apart from my older stuff (though I know I put the older ones through the same paces). The connective tissue joining verses and choruses and breaks and bridges is vital, too – sort of the way the human body is put together. You can’t leave out the details in between things, or they really don’t function properly. Stylistically, the songs vary widely – why would you want to repeat a style over and over? Once in awhile, I’ll write a retro number that might be in the same bag as something else I’ve done a long time ago, but I look on songwriting as a series of adventures, or vacations, or maybe life lessons. Naming the Twins has been together for more than 10 years, and we’ve grown comfortable going from serious topical songs to light-hearted novelty numbers. Why not? That’s life.

“On a couple of occasions, Kathleen and I have gone into a self-imposed songwriting sweatshop. It can be a very intense process… something I’ve always known, but something Kathleen has just recently begun taking part in. Oftentimes, when I hear songwriters bragging that they turned out 10 songs in 10 days, it doesn’t really impress me. You can dress a skeleton in clothes, but you need a whole lot of other things to make it dance, or express emotion, or convey depth and dynamics. Once in a long while, a song will hatch in a hurry, but I think there’s usually a full-term gestation period involved before it’s born. But I can only speak from my own experience. It’s also getting harder not to bump into pre-existing ideas for lyrics, so I think you have to work that much harder to gain ground with new lyrics, and new ideas, and new messages, or to assemble them in different ways without becoming too obscure.”

Shows? Do we have shows? Yeah… a few or forty! From Belleville to Chicago, from Halifax to Yarmouth, from Florida to New Hampshire, we’ve got you covered! We’ve got a fresh collection of original Winter Christmas songs from our new album Sing the Winter Away, and we’d love for you to hear them at one of these shows:

Something interesting takes over when we step into a performing space. We aim to first and foremost to establish a rapport with the people who’ve chosen to be there. So we banter back and forth, and put our personalities out there, along with the musical flow. We’ve seen performers using the same basic intros to most of their songs, and that works for them and their audience, but we endeavour to keep it fresh. It’s hard to predict what we’re going to say to each other, or to the audience, ‘cause we don’t yet know what’s going to be on our minds down the road. It’s like a conversation with friends; no need to repeat things, they’ll get it. Sometimes it’s funny or casual, and sometimes it’s expressing the way we’re feeling about the world. The core of the music itself is acoustic and very much harmony-driven. More and more, we’ve been singing to-and-fro vocals, which expands the range of the melodies. We have no trouble finding enough songs to fill a show; to us, it’s more difficult to weed a garden than grow one. It pleases us when we reach people with our music, so we’ll always keep trying to do that. Or more accurately, just let it happen.

Hard to make a choice here, but we have a song on our most recent album, Sing the Winter Away, called “Lay Down Your Weapons,” that might come first. I don’t know how many of our followers would agree. It’s certainly not a song for a Friday night bar gig or the Top 40 Countdown, but it seems to contain quite a number of quotable lines and positive global messages relating to our misuse of weapons. Actually, when you think of it, the use of weapons is pretty much as bad as the misuse of weapons – it’s just the arena that changes. There’s a military mindset, pervasive throughout history, that creates the illusion that weapons are necessary to protect us and the bigger the better. Many buy into it. But weapons ultimately serve the destructive side of humans, and the need for superior weaponry is the opposite of progress. If the most “successful” weapons were melted down or safely detonated, that would be progress. To undo what’s been invented, and funded, and promoted, and shut down the military machine is almost unthinkable to the military mindset. But until it becomes a goal of all leaders and decision-makers, we find ourselves under the shadow of potential devastation.

Matthew Byrne (blown away by his warm personality and impeccable vocals); Corin Raymond (admire how he reaches his audience, he’s so raw and genuine); Coco Love Alcorn (BLOWN away by her rich voice, her range and rhythm, and interaction with fellow musicians and audience members); The Hupman Brothers (these guys can pick and write with the best of ‘em); Bill Plaskett (has a warm glow with a song, and singing of a quality we remember from the ‘60s); Mama’s Broke (musicianship, rhythm, and authenticity that shows they live and breathe what they do); Musique a bouches (magnificent harmony, comforting and fulfilling); and Martin Kerr (a captivating artist taking things to a new plateau).