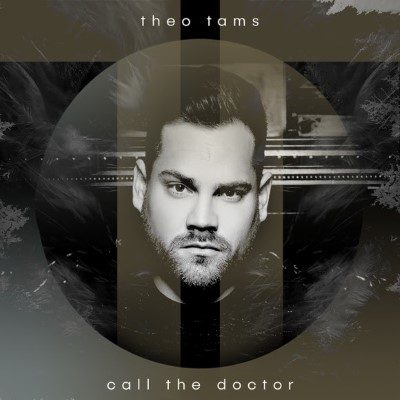 Theo Tams smashed onto the Canadian music scene after he successfully took the title spot while competing in the final season of Canadian Idol back in 2008. Tams followed up his win with the release of his full-length, critically acclaimed debut album Give It All Away in 2009. Throughout the past decade, Tams has had a successful music career and continued to create great music. Tams has used his life and musical experiences to grow and develop as an artist, and evolve as a songwriter and vocalist. Tams has now graced us with the release of his latest musical project, Call The Doctor.

Tams brand new EP Call The Doctor is a testament to his ability to create powerful and emotional music. Influenced by some of his favourite artists such as Sam Smith and Adele, Tams teamed up with Montreal’s Gautier Marinof to help bring his new music to life. Tams explained to Canadian Beats just what recording this EP meant to him; “Call The Doctor is the record I’ve been wanting to make for nearly a decade. I knew that we weren’t necessarily going to be able to hit radio but I’m okay with that, I wanted to be played in peoples home, People’s bedrooms, People’s basements, not clubs or bars. If this music resonates with people even half the amount it resonated with me creating it, I’ll be really proud.”

Call The Doctor opens up with the beautiful ballad “Good For You.” The track is based around Tams experience in the music industry and it is translated into a “love song gone wrong.” Using his songwriting skills, Tams opened up about his feelings as an artist and created the deeply honest track. “The first song “Good For You” literally started off as a song about the industry, just wanting to be good enough for it, good enough that there would be a place for me in it. That’s always been a struggle. I’m not the most commercial, the music is intense and emotional and intimate. It’s the kind of music that I listened to growing up, Sarah McLachlan, Jann Arden, old school Bryan Adams. There is less and less of that coming out these days, and I want to keep that thread of authenticity and vulnerability alive. The U.K. gets it; Sam Smith, Adele, Ed Sheehan, North America not as much.” said Tams about “Good For You.”

Tams co-wrote “Last the Rain” with Marinof, his producer on the EP. “Last the Rain” speaks about the ups and downs of being in a relationship and puts to music some of those strong feelings we can encounter in those trying situations. The EP title, Call The Doctor comes from the lyrics of this track. Tams does his best to tap into his emotions and utilize his creative songwriting abilities to confront these different aspects of his life. From “Weeds” which was inspired about his partner who was once married with a daughter, to “Romeo & James” which confronts the pain of keeping your lover and sexuality a secret from those you love, you can hear the raw emotion in Tams voice as he performs each track.

One of my personal favourite tracks on the EP was “Strangers.” Tams really used his voice to tell a story and the arrangement is smooth and catchy. The same goes for the track “Move Slow (Away From You).” Tams told us how the two songs came about; “Both “Strangers” and “Move Slow (Away From You)” are the two on the record that took me by surprise. I didn’t censor anything artistically when creating the album, and these two songs literally wrote themselves. I’ve always been inspired by old-school soul and RnB so it was really exciting to start playing with those types of sounds and melodies. There is definitely a throwback vibe but with more modern productions elements; it’s a brand new chapter.”

The EP sounds off with the moving track, “The Last Song.” Written about a past relationship, you can hear the heavy emotions through each note. Ending a relationship is never easy and “The Last Song” captures how many of us can feel in those last moments of a relationship. Another one of my favourites off of Call The Doctor, Tams vocals are one of the standout performances on the EP. Tams told us exactly where the song came from; “The Last Song was the easiest and hardest song I’ve ever written. It closed a chapter for me (FINALLY!) It’s written about an ex of mine who completely ruined me. That sounds so dramatic, but actually, I was a mess. I felt completely unworthy and useless for years after the breakup, and I found myself going into the studio for almost a decade trying to write songs and make sense of what happened. Then I wrote “The Last Song” with Ari Rhodes, and came out feeling like a weight had been lifted. I think a lot of people can relate to that feeling, breakups are hard, they’re a lot harder when you’ve been manipulated to feel like you are worthless without them. You’re not. You never were and never will be.”

Tams wears his heart on his sleeve on Call The Doctor. Opening up and sharing these stories isn’t an easy thing to do for anyone, but as an artist, Tams persevered and the result was his beautiful music. Call The Doctor has a solid and consistent sound. Each song showcases the many aspects of Tams vocal abilities and songwriting skills. The production is slick, and the musical arrangements compliment Tams vocals. From the first listen, you will find yourself hooked on the new music that Tams has produced. Tams has diversified himself as an artist and Call The Doctor shows us just why Tams needs to create authentic music. Have a listen to Call The Doctor on your favourite music platform and decide for yourself. You can also check out the music video for “Strangers” here.