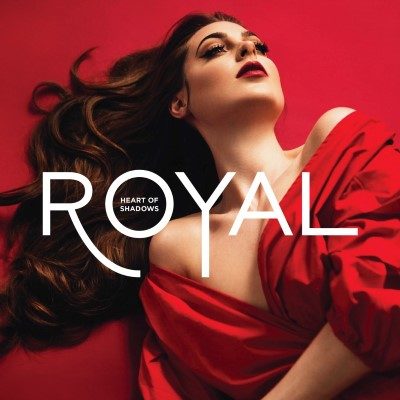 In ROYAL‘s newest EP, Heart of Shadows, the songstress weaves a dreamy soundscape for the listener based on a very personal journey. Within each track of Heart of Shadows, ROYAL eloquently guides us through the full story of a love gained and lost.

Starting with the track “Kings and Queens”, minimal instrumentation is used to let the strength of ROYALís emotional vocals shine. This helps evokes the simple but powerful feeling of a new love. I particularly liked how the track ended with a subtle deep base undertone to indicate the inherent danger lurking within such intense emotions.

Following soon after, the track “Vessel” is a much more lively by using electronic beats and complex harmonies to match its themes of passion and obsession following soon after love is acquired. Here it seems ROYAL felt so overwhelmed by this relationship to the point she felt her existence was only as a “Vessel” for her lover. The following track “Black Beauty” then uses a pulsing drum beat and electronic synths to evoke the start of a rebellion against that oppressive love.

The track “Reminiscence” has a sense of cinematic drama to it, aided by the heavy use of harps and a sweeping chorus. It seems in this part of the story, the romance has become not only overly dramatic but preformative in need of a curtain call. The track “The Hunter” is then the most aggressive song of Hearts of Shadows with its themes of anger, loss, regret, conveyed through a strong drum beat. This is clearly ROYAL walking away from the relationship that, though intense, was also highly toxic.

“Rebel” is the perfect closing track for the album which starts again with the simple vocals of “Kings and Queens” before moving to a powerful chorus of traditional instruments and vocals. In this final track, ROYAL indicates to the listener that not only has she physically separated from the relationship, but she has also begun to move on emotionally from the pain and trauma we have felt with her in the previous tracks. The lyric “I saw the road that lay ahead if you remained inside my head” in particular resonated with the theme of ROYALís conviction to move on.

Though each track in Hearts of Shadows could stand on its own, I highly recommend to interested readers to listen to the full story of this album to feel the full power of the journey ROYAL has tried to convey.