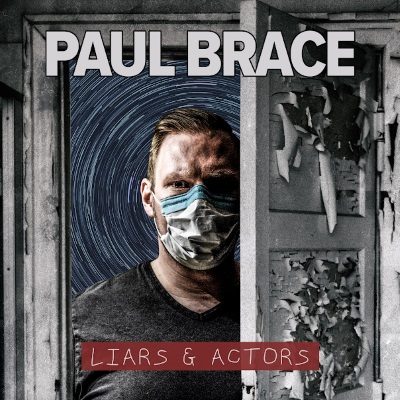 Paul Brace is a popular name in our local town of St. John’s, Newfoundland. He has been in a variety of bands with his latest being the ever-popular Waterfront Fire but this venture, Liars & Actors is his first time going solo. After a wild 2017 where he won NL Media Person of the Year and putting his cancer into remission, he is set out to make this year his own.

Starting off strong with “Awake”, which sounds like a personal accomplishment song, talking about how he found what he wanted. A strong opening to an album in my opinion. The following song “Bringing It Back” is a song I can hear playing at any local pub downtown on George Street, especially if he is playing it live. This is a song that would get the crowd interested with the easy to remember lyrics and the excellent guitar work.

“Sketch Blue” is a grungy-rock song with heavy guitar and bass with harder, deeper drum hits, reminding me of some early Foo Fighters work, even with the guitar solos littered throughout this song. This is a song to listen to if you like some good guitar work. “Summer” is a 5-minute acoustic anthem with a simple drum beat throughout, mixed with beautiful acoustic guitar picking and the great vocals of Brace.

The title track “Liars & Actors” is a slower jam compared to the rest of the album but is a great song to represent the album as the title track. It picks up towards the 2-minute mark with Brace’s powerful vocals coming in strong throughout this song. I’ll do a quick review of the final song on the album “Halfway There” which is another acoustic ballad that makes you feel like you’re young again, talking about stories from youth either they being personal to him or not, this song will make you feel about yourself throughout.

Since this album is a debut of Paul Brace as a solo act, he really shows that throughout his time on the local music scene, with all the bands he has joined, he found what he personally wanted to do while never losing touch with everything else he has done. This is a great album to show off the local talent we have here in St. John’s and someone I’d like to see live, even though I technically have already.