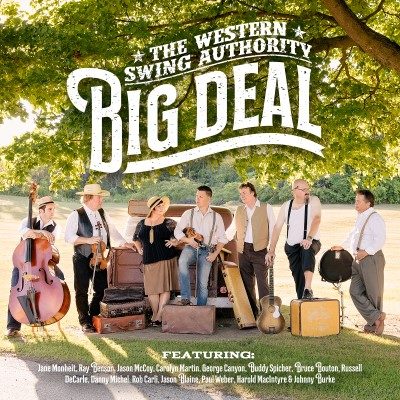 The Western Swing Authority are back with their fourth studio release, Big Deal.

The group is made up of players Shane Guse, Pee Wee Charles, Dan Howlett, Stacey Lee Guse, Matthew Lima, Jim Boudreau, and Paul Chapman. Counting multiple CCMA nominations and awards under their belt, this group looks to revive the western-swing ideals with their own added flair. Legendary country entertainer Garth Brooks even invited them to play a private party in Nashville.

Big Deal is a toe-tapping delight that is reinvigorating traditional country/swing melodies. Each of the 10 tracks features at least one vocal partner, and the roaster is quite impressive – catch George Canyon on the bopping sing-a-long “Big Balls in Cowtown”; Grammy-nominated Jazz singer Jane Monheit dazzles on the opening “Mississippi”; a little heartbreak that will make you want to sing along finds its way onto “After the Leavin”. Their collection of wistful tales, old-school country heartbreak, and graceful harmonies should instil some nostalgia in country fans.