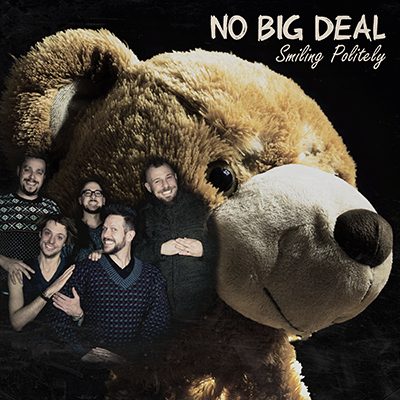 Streetsville rockers NO BIG DEAL released their third EP Smiling Politely last week. Boasting a tight but blazing five tracks, as well as a change in production style, this album captures a band as they step forwards and upwards, exploring new territory while not quite releasing their roots as a party rock band. Producer Ross Hayes Citrullo adds crisp and shiny texture to an already infectious natural melodic tendency, and overall this listener certainly feels like the production value has taken a different direction than previous releases.

Opening the album is a standalone guitar heralding the head-bobbing “Once Wild”, which takes on anthemic feeling almost instantaneously.  Immediately, this song of nostalgia paints it’s story as NBD’s trademark lyrical turn of phrase takes hold, the song alternately bouncing between frenetic punk rocking and grooving.

The pace instantly shifts to straight ahead punk as “Up All Night” comes in second, with a brilliant singalong part in its middle section. The song revolves around rock solid drum work by Matt Bellissimo and a memorable guitar melody. The album release includes a video (directed and produced by guitarist Michael Amaral) for “Up All Night”, where the band is terrorized and eventually massacred by a werewolf (vocalist Jay McCurdy).

Popping up at third, and my personal favourite, is “Bring the Rain”. The vocal work on this song stands out strong, some very appealing harmonies in the chorus especially and a definite flavor of country twang in the second verse in particular. This is another song with anthemic tendency, definitely a real crowd-pleaser.

Another of this album’s tracks to also have a video is track four “Can’t Let This Go”. This one is a real bar room banger. The hook is the best thing to holler at the top of your lungs, drunk as sin, in your local pub. But it has, like all NBD tunes, it’s lyrical imagination and storytelling, weaving its tapestry over a driving rhythm.

Finally, “Great Escape” rounds out the fivesome of tracks. This one is different, it begins much more somber than any of the other songs, and kicks into a guitar lead that builds into a punk rocker reminiscent of some older Foo’s or earlier Rise Against. This song shows a slight change in focus. It is heavier, and while it lacks none of the energy of any of NBD’s catalogue, this song seems angrier, more visceral.

Overall, this album and band are both worth checking out. I give this EP 8.75 of Kevin’s ugly sweaters out of 10. Cheers to you gentlemen, a job well done!