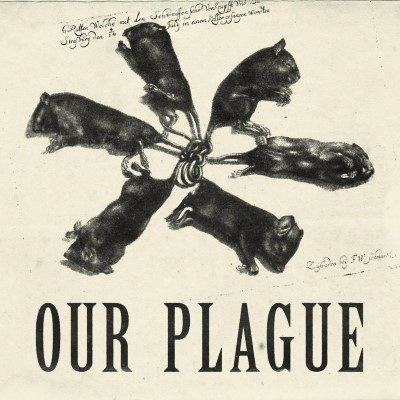 Hamilton punk rock trio Rat Parade have returned with their sophomore EP, Our Plague. Following the release of 2017’s self-titled EP, Our Plague picks up right where the band left off with four tracks that very well may just be grimier than ever.

Opening with “Age Of Disinformation”, Rat Parade returns with a sloshy punk banger that brings their angry Billie Joe Armstrong vibe to a sound similar to that of Social Distortion. The song kicks off the record with muddy bass, screeching dissonant guitar, throaty vocals, thrashing drums,  and an overall attitude that says don’t step to close to the stage, you very well may end up getting kicked in the face. What more could one want from their punk rock – I for one refuse to take it watered down from there. From there, Rat Parade delivers their aggressive take on pop-punk with “Second Chance”, a song that probably cares even less about you than the first one does.

“Worry Eyes” offers a more straight-ahead groove with a catchy chorus to boot, again reminiscent of early Green Day. The closing track, however, “Distant” is perhaps my favourite on the EP. “Distant” picks up in the same direction as “Age OF Disinformation” with a rhythmic onslaught of fuzzy, distorted power chords that refuse to let up, building into a blistering chorus, and culminating with a fiery guitar solo. This song certainly surpassed the expectations, taking a turn from ‘90s punk icons towards the genre’s west coast scene in the ‘70s.

As the album continues, I meet the initial problem I had with Rat Parade, the EP is just too damn short. I’m halfway through and I want more. Thankfully, Our Plague pairs nicely with their debut and together, the two make for a solid album. This is certainly a punk band to watch as they continue to progress forward with each step they take.