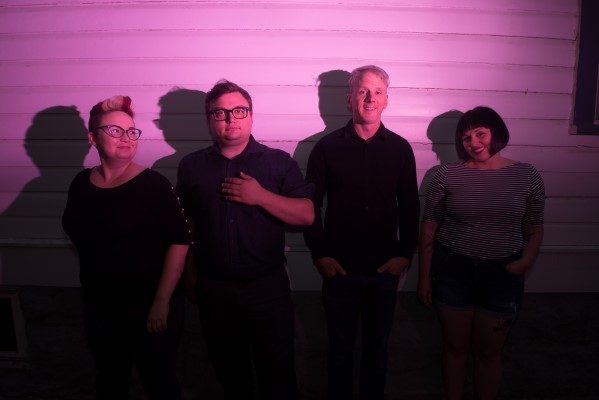 Winnipeg, MB-based synth-noise punk foursome, Softswitch have finished recording their brand new EP, Happiness, which was mixed in Chicago by Steve Albini and mastered by Bob Weston. We had the chance to chat with the band via our Five Questions With segment, so check that out below and give the EP a listen through, we think you’ll like what you hear!

Softswitch is a noisy post-punk band with krautrock influences from Winnipeg, MB, Canada. There are four people in Softswitch, their names are Suzy (Drums), Ryan (Bass, Vocals), Rob (Guitar), and Marisa (Synth). Softswitch has one release, called Happiness, out on November 30, 2018.

We actually spent a long time meeting very casually, but midway into our second year of hanging out and having tea and cookies and playing a few things, we made a conscious decision to get serious and finish a few songs and get some stuff recorded and start playing. Around then Marisa joined on synth and the bassist started doing vocals, and we’ve gotten a lot more strict about finishing songs, polishing the older songs, etc. We find we can work on two songs at a time and be productive, so we do when we can.

We’re releasing our tape, Happiness, on November 30 at Forth in Winnipeg. Our live show is very new, as we put off playing until after we’d sorted out the recording and Rob took some time off to be a new father. But the recording is a live performance as well, with no editing, so it’s very indicative.

Our first single is a song called Boys. It’s short, so even if you hate it, you haven’t lost too much of your remaining time on Earth.