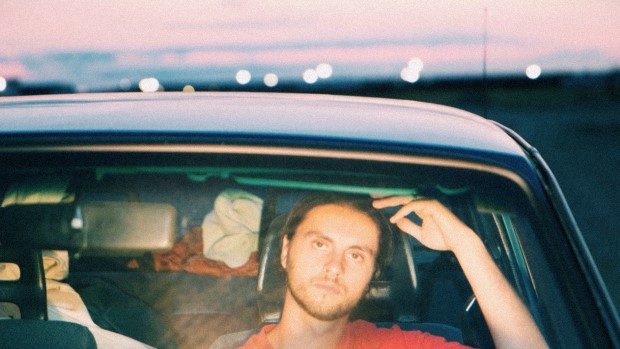 The seasons are changing and, with perfect timing for the ups & downs so many of us know, comes “Run Away”; the latest single from Old Man Canyon‘s new album, A Grand Façade, out November 16th. Ethereal with a touch of the old-school vibe, the new single leaves you with a “light as air” feeling that you’ll want to grasp onto for as long as you can.

With the release of your newest album, A Grand Façade, along with that of your latest single “Run Away”, is there a particular feeling or emotion you’d like the listener to walk away with after that very first listen?

My only real intention with music is to allow some sort of internal thought process to either be discovered or to be deepened in the listener. It’s my hope that through the things I talk about and the ideas I play with, someone can become intrigued to explore some sort of deeper work or desire to create something for themselves. Inspired by the chaos throughout the past year both in my personal life and the world, the albums theme is satirical in the way it’s told. It touches on the notion that we are always able to escape the consequences of our actions. I tried to tell stories that paint this “ignorance is bliss” idea we see all around us. I feel like people can connect to the underlying meaning better when it’s told in a sort of humorous tone, like the lyric “We’ll be on vacation till it blows by.” It plays on that concept of there always being a place to run and hide.

With such a specific and intricate sounds on recording, how big of a challenge is that to present live on stage?

There is always a challenge to re-create the sound you’ve accomplished on the actual recordings, especially when there are so many layers, like these songs. Over the years we have slowly figured out how to do this more efficiently, but I’m always looking for new ways to pull it off. At this point, we have about 4-5 synthesizers on stage along with sample pads to get all the little bits included. I’m considering adding a fifth band member to the stage set up, just so we can really get all the parts included.

You’ve had great exposure with shows like Shameless, Suits and Sons of Anarchy featuring your music in the past. How have those opportunities most impacted you? Are there any others shows you think you’d be a fit with?

Having my music be used in so many shows over the years has really allowed it to reach a global audience at a pace that otherwise would require a ton of touring. It’s been a pretty humbling experience to wittiness, and it’s something I hope will continue with the new music. It’s also really cool to see how all these different shows use the music to express and bring out certain emotions in ways that I would have never thought about relating to the music. In terms of shows, I’d like to have my music on, Stranger Things would be pretty awesome.

What would you say is the biggest difference between this release vs. that of your 2016 debut album, Delirium?

The biggest difference was definitely in how I made the records. Delirium was recorded in San Diego at a big studio with a producer, whereas A Grand Façade was recorded pretty much entirely alone at my home studio, apart from a two-week trip to Joshua Tree to add the final touches to the record. I also played every instrument on the album besides a few keyboard and guitar parts from my friends Malcolm Dow and Colyn Cameron, whom contributed in many ways. The only stages in the whole process I felt I wasn’t quite able to do myself, at least to the level I envisioned, was the mixing and mastering, which was done at Bryan Adams studio in Vancouver with engineer/producer Ryan Enockson. I think this album has a lot more groove and overall vibe. I used entirely analogue equipment and experimented a lot in the different ways of recording to achieve unique tones and effects that I think give the whole record a cohesiveness and feeling.

I’m most excited to just see where this music goes and where it allows me to go and play it for people. I have a ton of really cool videos and collaborations in the works and will be doing a big tour in early 2019. I can’t wait to get out there and play these new tunes. We’re working on the live show now and I think it’s going to be a really rad and cool experience for everyone involved.

Related ItemsA Grand FaçadeBC MusicGood While It LastedHive Mind PRInterviewOld Man CanyonRun AwayShamelessSongs of AnarchySuitsVancouver BC
← Previous Story Five Questions With Cinzia & The Eclipse
Next Story → Maddy Talks with We Were Sharks in Toronto, ON