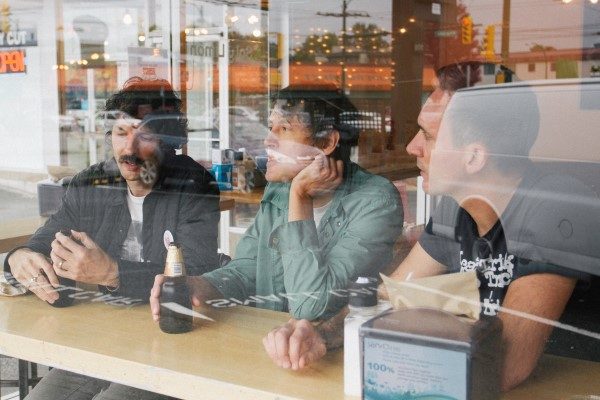 Nevado Music is thrilled to announce the signing of Vancouver indie rock group, Autogramm, with the release of their debut album, What R U Waiting For? Having begun with the idea for a band that would tour to sunny destinations, the members’ mutual admiration for punk and power pop brought the three together and yielded in a technically electrifying group.

First off, thanks for taking the time to chat with us today. How are you feeling now that your debut album is right on the brink of release?

Jiffy Marx: Feeling great, having fun, looking forward to playing more shows and visiting friends and making a new one! (new album not new friend but ya that too)

C.C. Voltage: Feels good that we’ll finally get to share it, and get out on the road.

How would you describe Autogramm to those who haven’t had the chance to listen to you yet?

Jiffy: A lot of people have compared us to The Cars, which is cool but sorta applies mostly to the song Jessica Don’t Like Rock’n’roll. It was our first single and video so obviously makes sense that it’s people’s first impression and of course not unintentional on our part. That said we definitely have other influences on other songs on the album- Gary Numan, Buzzcocks, The Go-go’s, The Nerves to name a few…

How does What R U Waiting For? differ from your previous sound—either individually or as a group—if at all, and what inspired the changes?

Jiffy: For me I know people probably think they differ greatly which is fair but I kinda think there are elements of punk in all the bands I’ve been in. They’re all punk bands. Time? Age? Money? Lots of things inspire/affect (effect?) change.

Silo: If you’re gonna start a new band, it might as well be different! I’d say this band is just the confluence of these here three people’s tastes and rock’n’roll dreams.

C.C. It’s actually the kind of band I’ve always wanted to play in, but it just didn’t materialize until now.

Do you have any memorable stories about the album, whether it be in the recording studio or during the writing process?

Silo: it came together really fast; we jammed for a month and found that we had ten songs that we really were digging. So we decided to “demo” them, and then ended up with the basic tracks for what we made into this album! A breeze, really.

C.C. We recorded the album in July, right when the forest fires had covered Vancouver in smoke. I remember coming out of the studio every day and being tripped out by the glowing orange sun and the skyline of the city being completely invisible. That and drinking beer and laughing a lot.

What do you think fans will be most excited by in this new release? Alternatively, what about the album are you proudest of?

Silo: Hard to say what other people will like about this, so I think it’s best not to speculate! I personally like it a lot, and I’m very proud of the album sonically and the fact that we truly made this a band effort…democracy can work!

C.C. I don’t want to give Josh Wells a big head, but I think his production and engineering skills are incredible and he made us an amazing sounding record. I’m very proud of that. I think fans will be happy to hear more songs that fit into the power pop/new wave genre, and that really sounds like they could have been released in the late 70’s or early 80’s.

I heard that you guys are touring all around the US in 2018 in support of the new album. Which locations are you hitting, and where can fans find the dates?

Jiffy: We’re meeting our label mates Gringo Starr in LA on Wednesday then touring up the coast with them. Then Toronto, Montreal and Ottawa with our friends Comet Control in October. Then Portland, Seattle, Vancouver, Victoria and Nanaimo with our friends Bread & Butter and Needles//Pins in November AND just found out we’re playing Tijuana with our buds Maniac in January! Travelling and playing with friends is definitely a big part of why we do this. We’re pretty good about keeping the dates listed on our website- www.autogramm.band. So far at least:) we are actually pretty terrible at doing most things on the internet!

Silo: Jiffy and CC look really good…I devolve into a hot and sweaty human heap over the course of 10 songs of wildly thrashing about the kit. Messy, loud, fun (at least for us!)

C.C. Well you couldn’t accuse us of standing around doing nothing, that’s for sure. I hope we make people want to dance mostly. Like the school dance in Fast Times at Ridgemont High kind of dancing.

Additionally, the release of your music video for your track “Jessica Don’t Like Rock ‘n Roll” is nothing short of electrifying— what was the inspiration behind the vintage feel of the video, and where did it come from?

Jiffy: We actually made a Youtube video playlist of all our favourite 80’s new wave and post-punk music videos and basically pilfered whatever we could. You can actually check out that playlist on our Youtube page I think?

C.C. We grew up with those kinds of bands, and we really just wanted it to look and feel like the real thing.

Lastly, what other tidbits and news about Autogramm should everyone know?

Jiffy: We have a new video coming out directed by Justin Gradin so keep your eyes and ears peeled for that and if you happen to be wearing socks when you do, be prepared to have them knocked off!