Five Questions With Cinzia & The Eclipse 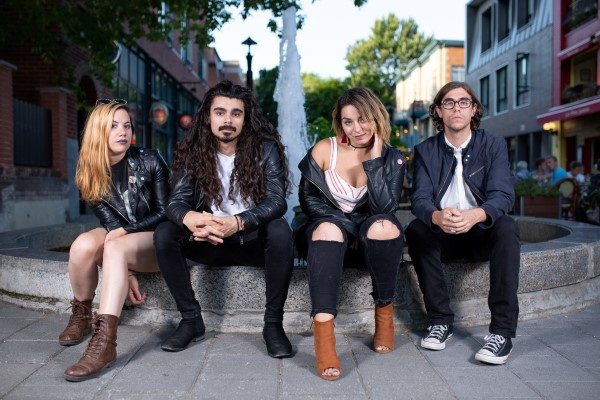 Montreal, QC-based four-piece dark pop/ alternative rock band, Cinzia & The Eclipse have recently released their new single, “Out of Love“. Check out the single below, and find out more about the band in our Five Questions With segment.

We’re Cinzia & The Eclipse,  a dark pop, alternative rock band from Montréal. We let our influences run wild through us when we write blending our love for gritty rock ‘n roll with a little modern twist to it!

We have Cinzia on lead vocals, guitar, Massimo on drums, Chase on lead guitar and Gina on Bass.

Massimo:  When writing we tend to walk the line of our own experiences through love and heartache. It usually begins with a simple soft melody or a thought out idea that is brought to rehearsal where we sometimes let the lyrical content lead. Then there are times where it is a concrete idea of how a certain songs’ sound and force should be and with this, it’s with each of our uniquely diverse musical backgrounds that we come together and bring the song to where it needs to be and how it’s heard in our heads.

Cinzia: We all bring a really special element to the songs so the writing style really wouldn’t be the same without everyone’s involvement in growing the arrangements form where they began to where they finish

Cinzia: We’re playing an Album launch on December 29th, at Casa Del Popolo and have a few acoustic shows coming up  – We invite people to come on over to our Instagram page for more details on those!

Chase: Out of Love, as it shows our polished influences with some grit and edginess, with a consistent pop sensibility throughout!

Cinzia: The Damn Truth 110% – Lee-la Baum’s roaring vocals hit me every time, Cleopatrick and heaps of The Beaches.

Massimo: Classics, of course, being Joni Mitchell to Neil Young to the Hip — but some wonderful local musicians have been blowing my mind recently like Matty Parker, Thanya Iyer, Jealous Painter, Kennedy and Hyre