Five Questions With Twice on Tuesday 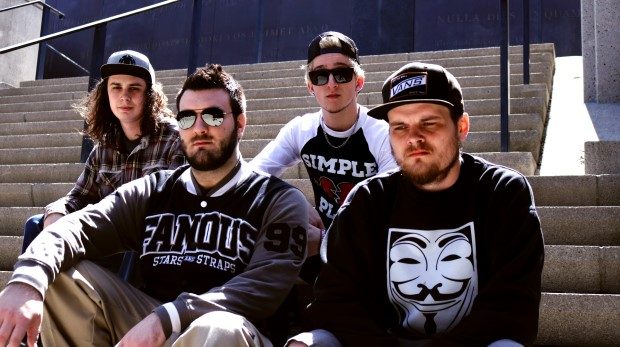 Quebec City pop-punk band, Twice on Tuesday recently released their new single, “Monday Morning” along with a music video for the release. This is the off of the band’s summer release, Lost at Home. The band took a few moments to chat with us for our newest segment of Five Questions With, so find out more about them below, and check out the video while you’re at it!

We’re the kind of band that writes its songs together. The 4 of us are all involved in the creative process almost all the time, instead of having just one member of the band who writes everything like a lot of bands do. We’re best friends and we usually have as much chemistry between us when we write music together than when we’re on stage but it’s safe to say that we never wrote a song the same way than we wrote another.

We grew up listening to Pop-Punk and we think it’s easy to guess it when you listen to any of our songs. We’re so heavily influenced by bands like Blink-182, Sum 41 and Simple Plan; our sound clearly has an early 2000’s vibe attached to it. However, we’re also really into newer bands like Neck Deep and State Champs, who are inspirations for us in this new wave of Pop-Punk.

Yes, we do have a show in Quebec City on December 3rd with Story Untold, Selfish Things and Strange & Disturbing. We’re currently booking our weekends for the following winter so more dates should be announced soon. For anyone who’s never seen us live, they can expect an energetic performance with lots of jumping, running around and sometimes throwing a few jokes between songs.

That would be extremely hard because we love them all so much, it would be like asking a mother to choose her favourite child… But if you’ve got time to listen to just one of our songs, you should check out “Monday Morning” because we just dropped a new video for it and we’re really proud of it.

God, there are so many! We’ve been fans of Sum 41, Simple Plan, Gob and plenty more Canadian bands forever but the Canadian alternative scene is just too good right now with bands like Seaway, Like Pacific, Story Untold, We Were Sharks, Rarity and Bearings (just to name a few) that are growing bigger and bigger on an international level. Bands like Harbour, Letdown, Rival Town, Hitch & Go, Flight 97 or The Wet Bandits are also really worth checking out if you’ve never heard of them.